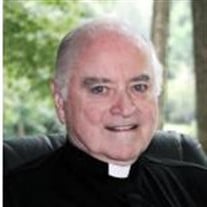 Father John Thomas Catoir, J.C.D., our “Messenger of Joy”, went home to be with God at the age of 90 on Thursday, April 7, 2022. Father Catoir, also known as Jack, was the son of John Thomas “Jack” Catoir and Catherine Mary “Kitty” Caslin. He was preceded in death by both of his parents and sister, Catherine Mary Catoir Benjamin. He is survived by his niece, Dionne Benjamin-Smith, her spouse, Jolyon Smith, and their daughter, Catherine Angelica, and his nephew, John Benjamin, and his spouse, Archie Symonette. Born on September 8, 1931, and raised in New York City, Jack graduated from Fordham University School of Business in 1953. After two years in the U.S. Army, he entered Immaculate Conception Seminary in Darlington, New Jersey at age 25 and was ordained a priest in 1960. Father Catoir earned his Doctorate of Canon Law from Catholic University in Washington, DC in 1964. He ran the Diocesan Marriage Tribunal for ten years, and in 1973, he was elected to the office of Clergy Personnel Director by the priests of the diocese. He was Chairman of the Board and Chief Executive Officer of The Christophers, a multimedia, nonprofit corporation based in Manhattan from 1978 to 1995. In that capacity, he hosted the nationally syndicated weekly television series "Christopher Closeup", for over 17 years. The show was seen on 60 commercial stations and 400 cable systems worldwide. From 1995 to 1997, he was Director of Communications for the Diocese of Paterson. From 1997 to 2000, he was the Executive Director of Eva's Village which, at the time, was New Jersey's largest comprehensive poverty program and one of the largest emergency shelters in the nation. Father Catoir was also president of three national organizations: The Catholic Press Association (1988-1990), The Association of Catholic TV and Radio Syndicators (1983-1985), and the National Association of Church Personnel Administrators (1975-1977). He has written more than 25 books including the best sellers, Enjoy The Lord, World Religions, and God Delights In You: An Introduction to Gospel Spirituality. He was also a syndicated columnist for Catholic News Service reaching a worldwide readership. In 1993, Father Catoir received the St. Francis de Sales Award for outstanding contributions to Catholic journalism, the highest award conferred by the Catholic Press Association. The Daniel J. Kane Award for Religious Communication was awarded to him by the University of Dayton in 1993, and the Catholic Actors Guild gave him their St. Genesius Award for his outstanding spiritual service to the entertainment industry in 1990. In 2004 he received the Christopher Leadership Award which recognizes individuals "whose work, actions and example serve as a guiding light to others." In 2016, the Catholic Media Association created the annual Father John Catoir Evangelization Award to recognize the positive impact of a Social Media campaign to make Jesus known and loved. Father Catoir had many wonderful accomplishments throughout his life, however, the greatest of these came after an audience with Saint Pope John Paul II in 1979 who encouraged him to follow his passion and to “go forth and become a messenger of joy”. With these words in his mind and the Holy Spirit guiding him, Father Catoir started a new ministry after stepping down as the director of The Christophers. In 1995 he founded St. Jude Media Ministry which began as a small radio ministry spreading uplifting messages of Joy and God’s Love. By 2010, the Ministry expanded to include the Messenger of Joy website and daily blog and in 2012 the website johncatoir.com was launched offering an archive of his writings and spiritual content including articles, audio and video clips, and select interviews from Christopher Close-Up. This ministry continued to be his pride and joy until his dying day and has helped so many around the world to experience the joy that filled his soul. A Mass of Christian Burial will be held on Monday, April 11, 2022 at St. Michael the Archangel in Cary, NC at 11:00 AM with graveside services following at Our Lady of Guadalupe Catholic Church in Newton Grove, NC at 2:00 PM. Please send donations in lieu of flowers to Eva’s Village in Paterson, NJ; Catholic Charities Diocese of Paterson; or Heartland Hospice - Promedica Foundations Hospice Memorial Fund. Live Stream Viewing Directions for your friends and family: To watch the Funeral Mass at its scheduled time, please go to our Parish Website, found at https://www.stmichaelcary.org/live-mass To watch the Mass at a later time, follow the steps above, then scroll down to “Parish Streaming Channels”. Once there you can click on our Funerals and you will find a link to view.

The family of Father John Thomas Catoir created this Life Tributes page to make it easy to share your memories.