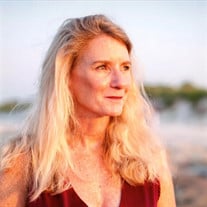 On Friday, February 8, 2019, Jocelyn Jordan Kennedy, loving wife, cherished sister, friend and aunt passed away at the age of 56. Jocelyn was born on April 9, 1962 in Lowell, MA, and raised in Westford, graduating from Westford Academy in 1980. She was the fourth child of Richard and Dorothea Jordan of Westford Massachusetts. Jocelyn received her Bachelors of Science degree in Business Administration at North Adams State College in 1984, and later completed a Diploma in Accounting at Bentley College. She worked in finance and data management for over 20 years. On September 11, 2010, she married the love of her life, Peter William Kennedy, originally from Walpole, MA. Jocelyn was a devoted family member who joyfully shared her life with her parents, siblings and many nieces and nephews. In addition, she was adored by many neighbors and friends wherever she was. She loved her summers in Barnstable on Cape Cod and Westport Harbor. She never missed a good beach sit and a ride in a boat. She loved her New England Patriots, Bravo TV, volunteering, skiing and traveling around the world. In 2012, Jocelyn and Peter made a new home in Cary, North Carolina. There, she was known for her neighborhood Pumpkin Carving and Kentucky Derby parties. She did not let illness define her, and lived with purpose as fully as possible. Jocelyn had a strong faith and was a life-long Catholic. Jocelyn is preceded in death by her parents, Richard and Dorothea Jordan. She is survived by her husband Peter, and brothers Rick, Chris, Glenn and Paul Jordan, and sister Cindy Jordan Sweetser. She will be deeply missed by her sister-in-laws Sandy Jordan, Peggy Jordan, and brother-in-laws Arthur Sweetser and Gabriel Lozano Porta. Peter’s family William and Nancy Kennedy, Charlie and Audra Kennedy, and Greg Kennedy mourn her passing. Jocelyn will be especially missed by her beloved nieces and nephews: Melanie Jordan, Grace Sweetser, and Brooke, Grace, and Brenna Kennedy, Tim Jordan and wife Chelsea, Ted and Asa Sweetser, Ben Jordan, Patrick Appiani, and Braden and Alex Kennedy. A funeral mass will be held at St. Catherine of Alexandria Church in Westford, MA on Monday, February 25th at 10:00 am. A luncheon and a celebration of her life will follow. This summer, at her wishes, she will be spread over the Bay on the Cape, and in Westport Harbor. In lieu of flowers, donations can be made to the Ovarian Cancer Research Alliance at www.ocrahope.org .

On Friday, February 8, 2019, Jocelyn Jordan Kennedy, loving wife, cherished sister, friend and aunt passed away at the age of 56. Jocelyn was born on April 9, 1962 in Lowell, MA, and raised in Westford, graduating from Westford Academy in 1980.... View Obituary & Service Information

The family of Jocelyn Marie Jordan Kennedy created this Life Tributes page to make it easy to share your memories.