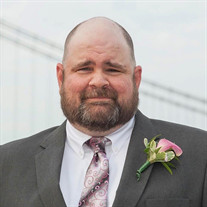 James Paul Kustka, “Jim”, 48, passed away Saturday, January 4, 2020, after a brief but hard-fought battle with lung cancer. He leaves behind his mother, Brenda Isasi; Step-Father, Roy Isasi; sister Debra Kustka, her wife Kathy Morris; brother Tim Kustka, his wife Sitvanit and their daughters Noga and Nofar; brother Matthew Kustka, his wife Denise, their daughters Emily and Payton and son Adam. He was preceded in death by his father, James Henry Kustka, who died at the age of 49 in 1991. Born in Manhasset, NY on February 12, 1971, Jim was adopted as an infant by Brenda & James Kustka and raised in Farmingdale, NY. Jim served in the Air Force from 1990-1994 immediately after graduating from Farmingdale High School and proudly fought for his country during Desert Storm. That experience was a large part of who Jim was and to show his appreciation he continued to honor his fellow veterans by placing flags at Raleigh National Cemetery for both Veterans Day and Memorial Day every year. Jim lead an uncomplicated life. He only participated in things that he was truly passionate about. As a result, he was never distracted by things that didn’t matter and always gave his full attention to those he was with and what they were doing.  Work was one of his passions. He was a Turf Manager at Eastern Turf Maintenance for almost 10 years and truly cared about delivering the best quality service to his customers. His authenticity showed because they, in turn, cared about him. During Jim’s illness his employer, co-workers and customers rallied around him like family. They loved him as much as he loved them. His other passions were family and football. If he wasn’t rooting for the Steelers or Notre Dame he was hanging out with his brother Matt and his family. Matt often joked that he had a family of 6 because Jim never missed an opportunity to be part of it. Whether it was a family trip to NJ to visit his sister, supporting his nieces and nephew in their activities, prepping for the holidays or just sharing a drink Jim was there enjoying the moments. Jim’s life was short but in some ways, because he expected nothing and appreciated everything, he lived more than most. There will be a visitation from 1:00 pm to 2:00 pm Thursday, January 9, 2020 at Apex Baptist Church, 110 S. Salem St., Apex. A memorial service will be at 2:00 pm in the sanctuary of Apex Baptist Church. Inurnment with Military Honors will follow in Wake Memorial Park, Cary. The family would like to thank the incredible staff at Durham, VA for their compassionate care and support. The quality of care they provided was an unexpected blessing during a very difficult time. In lieu of flowers, the family asks that donations be made to the Durham VA General Purpose Program. https://www.pay.gov/public/form/start/50810087/

The family of James "Jim" Paul Kustka created this Life Tributes page to make it easy to share your memories.

Send flowers to the Kustka family.