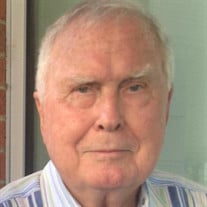 James “Jim” Morrison Irvin of Cary, NC, 87, died Thursday, September 9, 2021, at the State Home for Veterans in Kinston. Born on October 24, 1933, in Cabarrus County, NC, he was the son of the late Crawford M. and Pearl Williams Irvin. Jim graduated from Bethel High School in Midland, NC, and from the University of North Carolina at Chapel Hill. Jim was a proud Tar Heel, class of 1955, a member of the Rams Club and always enjoyed sporting the Carolina Blue, attending events in Chapel Hill, and promoting the work of the University. He was especially proud of the fact that both of his children and their spouses were also UNC-CH graduates. Jim was a longtime and active member of Cary First Methodist Church. Jim retired from the Division of Services for the Blind after many years of service in various capacities within state government. He was also retired as a MSgt from the U.S. Army Reserves following active duty in the Army after college. Jim was involved throughout his life with any number of civic organizations and devoted much of his time in the last half of his life to service with the N.C. Lions and particularly the Cary Lions club. Jim’s service included tenures as District Governor and President of the NC Lions Foundation. Jim’s children and grandchildren respected and loved him. They particularly appreciated the Christian values of honesty, perseverance, service above self, and fairness to all. Jim learned these, like many of his generation, through the severe economic hardships of the Great Depression. He especially benefitted from the example of his mother, who essentially was a single parent raising 4 boys during the 1930’s and 40’s. Jim faced many health challenges in the later years of his life, and he met them with dignity and humor (most of the time). His wife and daughter were caretakers for him during the latter stages of his illnesses, and he usually showed appreciation. After he suffered a severe stroke this year, he moved into the North Carolina State Veterans Home in Kinston, NC, where he was beloved by the entire staff. When Jim was in second grade, his teachers named him, “a little ray of sunshine.” He clearly was an outgoing and cheerful “ray of sunshine” to the staff at the nursing home. His family will be always grateful for their kindness, compassion, and professional care. Jim’s life of service to others is best summed up by the words of Jesus in the Gospel of John, “Greater love has no one than this, that someone lay down his life for his friends.” (John 15:13) Jim is survived by his wife of 67 years, Gay Hartsell Irvin and two children: Dr Stephen Irvin (Carol) of Kinston, NC, and Julie Irvin Cutler (Glenn) of Cary. Jim and Gay were blessed with twelve grandchildren: Hannah Irvin Boykin (Dom), Jackson Irvin (Jamie), Matt Irvin (Chelsea), Abby Irvin Yancey (Sam), Josiah Irvin (Diana), John Irvin, Mary Irvin, Joannah Irvin, Dan Irvin, Becky Irvin Jordan (Tye), Jamie Cutler (Kaylee), Kyle Cutler (Maryam) and fourteen great grandchildren – so far! No public services are planned at this time. The family will gather for graveside services at the Historic Oakwood Cemetery in Raleigh. Memorials may be made to the North Carolina Lion's Foundation, P.O. Box 39, Sherrills Ford, NC 28673 or the charity of one's choice.

The family of James Morrison Irvin created this Life Tributes page to make it easy to share your memories.

Send flowers to the Irvin family.