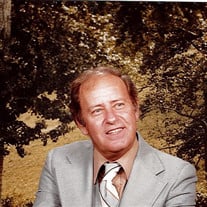 Hersal was born in Wake County to the late Joseph M. and Ollie Horton Beal. He is survived by his wife of 67 years, Hilda Howell Beal, his brother Melvin Beal, sister Gaynelle Shaw, and sons Duane (Betsy) and David. Also surviving are; granddaughters Megan Carmona (Justin), Melissa Mallard (James), great-grand-daughter Mya Mallard, and great-grandson Silas Carmona, and several wonderful, loving nieces and nephews. His childhood was spent in the farming community of Carpenter. He graduated from Green Hope High School at age 16, returning to do post graduate studies because he knew he would soon be drafted to serve in the war effort. He served in the U.S. Army with the 106th Reconnaissance Troop in Europe and attended Central Intelligence Command Division and the Central Intelligence Division school. After returning home from Europe he started his career with Piedmont Airlines in New Bern, NC as a station manager. Hersal later returned to the farming he loved where he grew tobacco, grain, and beef cattle. His career followed to employment with the U.S Postal Service in Apex, NC., retiring after twenty years of service. After Hersal and Hilda retired they moved to the mountains which they loved, and they spent time in Sparta, NC and Sebring, FL playing golf with friends. He was a person with a keen, inquisitive mind and pursued many interests throughout his life including history, true and old West collections, and poetry. An avid reader and lover of all types of music, he leaves an extensive collection of books and music to be treasured by future generations of his family. Hersal loved sports of all kinds including golf, football and baseball, and was a NC State Wolfpack and St. Louis Cardinals sports teams fan. He and a friend discussed the idea of starting a program for pee wee and midget football and Pony baseball in Apex. With the help of the Apex Jaycees and physicians this was accomplished. He had an easy-going nature and was a good listener which earned him the respect and love of those who knew him. He was a faithful member of Salem Baptist Church in Apex and served in many capacities including teaching Sunday School, working with the Royal Ambassadors, and singing in the choir. A memorial service to celebrate Hersal’s life will be held at 2pm Friday, July 14, 2017 at Salem Baptist Church, 1821 N Salem St, Apex, NC 27523 in the church chapel with a visitation and reception to follow in the fellowship hall. In lieu of flowers the family request memorial be made to the Prayer Garden or Building Fund at Salem Baptist Church.

The family of James Hersal Beal created this Life Tributes page to make it easy to share your memories.

Hersal was born in Wake County to the late Joseph M. and Ollie...

Send flowers to the Beal family.