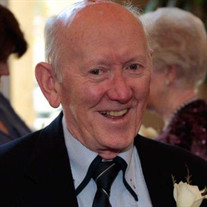 James Michael (“Jim”) Dougan, aged 87, died peacefully on September 16 at the SECU Jim & Betsy Bryan Hospice Home of UNC Healthcare. Jim was born May 17, 1933 in Milngavie, Scotland, the son of James Butler Dougan and Annie Hegarty Dougan. He moved to the United States in 1957 and in 1962, he married the love of his life, Kathleen P. Dougan, after meeting her at an Irish dance in New York City. Together they raised two children, Mary Elizabeth Adamik of Apex, NC, and James Paul Dougan, of Washington, DC, and have been blessed with two grandchildren, Elizabeth Adamik Gallagher of Danbury, CT and Rebecca Adamik of Cary, NC. Jim worked for IBM in East Fishkill, NY for over 25 years until his retirement in 1992. His true loves were music and art, which he passed on to his children. Jim played the guitar, piano, and clarinet, and sang in a beautiful tenor voice. Jim was an accomplished draftsman and often drew for fun or for the amusement of his family. He had a warm, wonderful sense of humor, and always had a joke or funny story ready, often punctuated with different voices and accents to make them all more entertaining. He was also an avid golfer, which was the source of many of his jokes and funny stories. Many golfing partners said that he had one of the sweetest natural golf swings they had ever seen. Jim was active in his churches at St. Joseph’s, Millbrook, NY and St. Francis, Raleigh, NC. At St. Joseph’s, he was a longtime member of the folk group, and sang and played guitar at Mass nearly every Sunday for decades. He was also a composer, writing music to accompany the “Our Father” and “Hail Mary” which is now copyrighted with a music publisher. His version of “Our Father” was the staple of Sunday Masses at St. Joseph’s for nearly his entire time at the parish. He was also active at St. Francis, and was a devoted volunteer at Catholic Parish Outreach, Raleigh. Family, friends, and neighbors all remember Jim as an incredibly kind, generous man. Jim is survived by his brother, John Dougan of Willow Street, PA, his daughter and son, his son-in-law Rev. George Adamik of Apex, NC, his daughter-in-law Rachel Dougan of Washington, DC, his two grandchildren, and many beloved friends and extended family members. There will be a small private memorial service held at St. Francis Church, Raleigh, NC. In lieu of flowers, memorial donations can be sent in his name to causes dear to his heart: (1) Catholic Parish Outreach, 2015 North Raleigh Boulevard, Raleigh, NC 27604, also reachable at 919-873-0245 or www.cporaleigh.org; or (2) the National Multiple Sclerosis Society (www.nationalmssociety.org/Donate). The Dougan family would like to extend their gratitude to the staff at the SECU Jim & Betsy Bryan Hospice Home for their attentiveness, kindness, and care for Jim over the course of his last few days, and to the staff at Spring Arbor Cary for their kindness and care over the last few months.

The family of James Michael Dougan created this Life Tributes page to make it easy to share your memories.

Send flowers to the Dougan family.