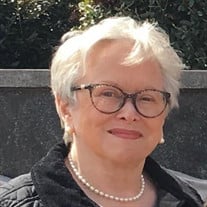 Hope Algieri Watts, 74, of Pittsboro passed away on Monday, September 24, 2018 at UNC Hospital surrounded by her family. Hope was born in Brooklyn, New York, on March 26, 1944 to Salvatore and Genevieve Algieri. She was the eldest of four children. Hope grew up in numerous countries as her father was an Air Force Officer. She graduated from Atwater High School in Atwater, CA in 1962 and attended Mount St. Mary’s College, Los Angeles, CA and the University of California, Santa Barbara. In 1965, Hope married the love of her life, Barry Watts, at Vandenberg Air Force Base in California. She was a loyal wife and mother, supporting her family as they moved all over the world in support of Barry’s Air Force career. She eventually settled in Washington D.C. in 1978. A few years later she joined the Magruders’ Grocery Stores as a cashier, eventually becoming a store manager and, later, operations supervisor for the entire chain. Hope was a beloved sister and grandmother. After spending 38 years in the Washington D.C. area, Hope recently retired to Pittsboro, North Carolina with her husband Barry to be closer to their children and grandchildren.  Hope was an avid reader and card player traveling the U.S. and Canada to compete in Masters level duplicate bridge tournaments. She loved to travel and went to a wide variety of countries with her husband, family, and friends. Hope is survived by her husband of 53 years, Barry Watts, her two daughters Stacey Christian and Becky Burke, her five grandchildren Alex Christian, Lauren Christian, Hayden Selmer, Morgan Selmer, and Frank Burke. She is also survived by her three brothers Robert, Joseph, and Matthew Algieri. We will celebrate Hope’s life on Sunday, October 14th, at the Gathering Place in Fearrington Village, North Carolina, from 1:00-3:00 pm. The family will receive guests in their home at 1 Bladen, Fearrington Village, following the service. In lieu of flowers, donations may be made in Hope’s memory to Wounded Warrior Project at https://support.woundedwarriorproject.org.

Hope Algieri Watts, 74, of Pittsboro passed away on Monday, September 24, 2018 at UNC Hospital surrounded by her family. Hope was born in Brooklyn, New York, on March 26, 1944 to Salvatore and Genevieve Algieri. She was the eldest of four children.... View Obituary & Service Information

The family of Hope Watts created this Life Tributes page to make it easy to share your memories.

Hope Algieri Watts, 74, of Pittsboro passed away on Monday, September...