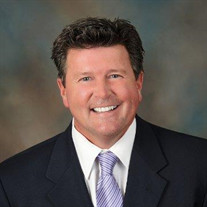 Guthrie C. “Scott” Smith Jr., 57 of Cary, NC passed away on February 23, 2016 surrounded by his loving family. Scott’s courageous battle with ALS inspired many and his message of perseverance, love, and friendship continues. He was born on August 28, 1958 in Johnson City, NY. A 1976 graduate of Garinger High School and 1980 graduate of Appalachian State University. His passion was evident as a friend, mentor, and leader in his 32 year career in the medical sales industry. He thrived on helping others achieve success and pursue their dreams. His love and devotion for family and the selflessness of caring for others is the foundation of his legacy. His adventurous spirit created happiness, beautiful memories, and joy. Scott is survived by his wife of 34 years, Janet, son, Ryan and his wife Claire (Marks), daughter Allison and her fiance Carlos Ranghel, mother Ruth Smith-Byers and her husband Richard Byers, his sisters Debbie McMorrow and Sharon Thompson and their families. In addition is survived by his mother in-law Peggy Stemple, and Janet’s brothers, sister, and their families. He was predeceased by his father Guthrie C. Smith, and father in-law Edward F. Stemple. The Smith family extends our warmest thank you to the staff at Duke ALS clinic, our Transitions hospice team members, Father Daniel Oschwald and Leslie Stironek from St. Michael’s Parish, and our family and friends. A funeral mass will be held at 1pm on Saturday, February 27, 2016 at St. Michael the Archangel Catholic Church, 804 High House Road, Cary NC. Visitation with the family begins at 12 noon. Inurnment immediately following. Memorial contributions may be made to The ALS Association or Transitions LifeCare. Online condolences may be made at www.wakefuneral.com

The family of Guthrie C. "Scott" Smith, Jr. created this Life Tributes page to make it easy to share your memories.

Send flowers to the Smith family.