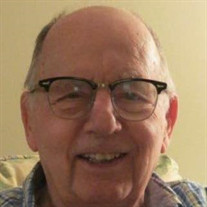 “He was a wonderful human being: loving, welcoming, and inclusive - a genuine follower of Jesus Christ . . . Anyone who knew him was entertained, enchanted, enriched and grateful.” Gordon Reynolds, 97, died peacefully on October 30, 2021, in Fuquay-Varina, NC, surrounded by family and his wife of 68 years. Gordon was born in Providence, RI on June 27, 1924, to his parents, Frederick and Ethel Reynolds. At the age of 19, he enlisted in the U.S. Navy and served in the South Pacific during World War II on the USS Kitkun Bay. In 1952, he married Elizabeth Tracy Arnold (Betty) and they shared a lifetime of love. His career of 37 years was spent with AT&T (Bell Labs, Western Electric) in many roles, including working on ships to install communication cables on the ocean floor, being involved in the early days of the space program, and securing the first major microwave communications project in Southwestern Asia. His jobs took him and his family from New Jersey to North Carolina, Alabama, Saudi Arabia, and finally back to North Carolina, where he retired in 1982. Gordon was a gentle, patient, and kind man of great faith who was devoted to his family and appreciated every year he had on this earth. From a young age, he loved to tinker with electronics and embraced the computer age. He also loved to travel, and took his family on wonderful journeys across the country and to the beach with their camper. In his retirement, Gordon and Betty explored the world and made many friends along the way. No matter where he lived, he was involved in the Episcopal Church, serving for several years as a Stephen Minister and also a Cursillo team member. He always gave freely of his time and treasure. Gordon had a fun sense of humor and a positive outlook on life, and was a true patriarch. When he stood to speak or pray, his words had meaning and came from the heart. He will be missed by the many people whose lives he touched. In addition to his wife, Gordon is survived by his four children, Paul Reynolds, Susan Gilbert (Andy), David Reynolds (Lynn), and Anne Brock (Gerald), and seven grandchildren, Michael Gilbert, Steven Gilbert, Sharon Gilbert, Emma Reynolds, John Reynolds, Kelli Brock, and Sydney Brock. Gordon’s life will be celebrated at St. Paul’s Episcopal Church in Cary, NC. on Friday, December 3rd at 11:00 a.m. In lieu of flowers, donations can be made to TLC (Tammy Lynn Center), 729 Chappell Dr., Raleigh, NC 27606 (www.nctlc.org/gordonreynolds).

&#8220;He was a wonderful human being: loving, welcoming, and inclusive - a genuine follower of Jesus Christ . . . Anyone who knew him was entertained, enchanted, enriched and grateful.&#8221; Gordon Reynolds, 97, died peacefully on October... View Obituary & Service Information

The family of Gordon Reynolds created this Life Tributes page to make it easy to share your memories.

“He was a wonderful human being: loving, welcoming, and inclusive...

Send flowers to the Reynolds family.