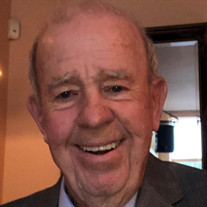 Francis John Gillooly, age 87 of Holly Springs, NC, formerly of Brockton, MA passed away peacefully in his home on Thursday, June 2, 2022 after a valiant battle with pancreatic cancer. Born in S. Boston, MA to the late Edward G. and Catherine M. (Coyman) Gillooly, he was the second eldest of 11 children. He leaves behind his loving wife of 64 years, Carol Ann (Finn) along with his daughters Patricia Khouri and her partner Bob Nadeau of Raleigh, NC; Kathleen Petersen and her husband Christopher of Cary, NC; Linda Gillooly and her partner Derrick Berry of Sanford, NC; his grandchildren Allyson Khouri, Jason Khouri and Christina (Khouri) Schaeffer; Jill (Petersen) Ferguson, Kevin Petersen, and Shannon (Gillooly) Bell; his great-grandchildren Kenzie and Lily Ferguson and Hudson Schaeffer. He was also the special Geeka to Addison and Drew Smith. Loving brother to David Gillooly, Patricia Robinson, Jean Hartman, John Gillooly, and Dennis Gillooly as well as many nieces and nephews. He was predeceased by his brother Edward and sisters Carol Smith, Catherine MacDougall, Mary Gillooly, and Susan Jones and several nieces and nephews.. He was immensely proud of his 42 year service to the Massachusetts Army National Guard/US Army as a radar technician and a recruiter. He retired in 1995 as Master Sergeant. He had a deep faith in God. He served as a Eucharistic minister and Parish Activities Director at St Colman’s Church and then as Eucharist minister at St Andrew’s Catholic Church, Apex, NC. He and several of his comrades formed the Massachusetts Army National Guard Enlisted Association to advocate for better benefits for soldiers in MA. He and Carol traveled to many states to attend conventions where they made innumerable friends. In 2007, they moved to NC to retire and be closer to family. He enjoyed many happy moments with his three great-grandchildren. Friends and family will be welcomed at St. Andrew’s Catholic Church In Apex, NC on Friday, June 17, 2022 at 10:30am for a funeral mass. Burial will be at a later date at the Bourne National Cemetery in MA. In lieu of flowers, please consider making a donation to a veteran in need or support your local USO.

The family of Francis John Gillooly created this Life Tributes page to make it easy to share your memories.

Send flowers to the Gillooly family.