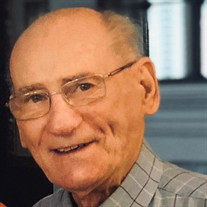 Francis “Frank” J. Burrell of Cary, was born in Queens, NY on March 8, 1933, and passed away on May 3, 2021. After graduating high school, he joined the Air Force and was trained as an aerial gunner. He flew 50 combat missions over Korea as a tail gunner on a B26 and was twice awarded the air medal, as well as the Air Force's Distinguished Flying Cross. After his discharge, he was accepted at New York University, completing all courses at night, and graduating with a BS degree. During this time, he started working as a clerk in the Engineering Dept. of R. Hoe & Co., a major manufacturer of newspaper printing presses, and worked his way up to Regional Sales Manager. He married the love of his life, Rosemary, and they had three children. Frank is survived by his wife; his daughter, Jeannie and son-in-law, Mark; his son Donald and daughter-in-law, Fatima; and son, Scott, as well as his three wonderful grandchildren, Lindsay, Ryan and Nicholas. After his tenure with R. Hoe & Co., he accepted a consulting position at the American Newspaper Publishers’ Assoc. Research Institute. At the time, a new evening newspaper was being planned for NY City and Frank was invited to join the staff to help plan the production facilities, which would utilize state-of-the-art technology. However, after a year of planning the project, it was terminated and never came to fruition. He and his wife decided to start their own business, called Burrell Enterprises, Inc. This consisted of purchasing home-sites, designing and building new homes and investing in other businesses. They retired to Florida, staying briefly, before moving to Carolina Preserve in Cary, where he thoroughly enjoyed making new friends and being closer to the family. A funeral mass will be held at St. Michael the Archangel Catholic Church, 804 High House Rd, Cary, NC 27513, on Wednesday, May 12, 2021 at 11am. In lieu of flowers, the family requests donations be made to https://onrealm.org/StMichaelArchangel/-/give/STMHONDURAS

The family of Francis "Frank" Burrell created this Life Tributes page to make it easy to share your memories.

Francis “Frank” J. Burrell of Cary, was born in Queens, NY on...