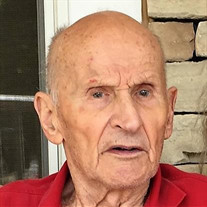 Everett Riddle Hunt was born on November 17, 1926 in Kellogg, Idaho to Everett Rowland Hunt and Grace Riddle. Mr. Hunt died on July 3, 2017 in Knightdale, North Carolina. His father was a pastor for the Congregational Church which took them to Colville, WA, Spokane, WA, Dayton, OH, and finally Seattle, WA. Everett had two sisters. Grace Roberts Hunt who died at the age of 2 from a brain tumor, and Jean Hamilton Hunt, who continues to live in the Seattle area. Everett graduated from high school in Seattle and went directly into the Merchant Marines. When he was old enough, he transitioned into the Marine Corp at the end of World War II. He was an airplane hydraulics mechanic working on the Corsair airplanes on the USS Palau and the USS Midway. When he returned from the war he went to the University of Washington where he studied forestry. He had planned to work in the forestry field from an early age. Right after he graduated with his Bachelors Degree he married Gloris Wiegers who lived a few blocks from his parent’s house in Seattle. They spent their honeymoon in a forest lookout tower near Burns, Oregon. After college Everett was hired by the Oregon Department of Forestry where he enjoyed 32 years of doing what he loved, working in the woods. His job took him from Forest Grove, to Salem, to Tillamook, to Coos Bay, and then back to Salem where he finished his career. While he was stationed in Forest Grove he took part in the firefighting efforts on the last Tillamook Forest Fire in 1951. Everett was a very patient man with a great sense of humor. He was always looking for an opportunity to help anyone in need. He often would drop a project he was working on to help a neighbor with their project. He loved being outdoors doing anything such as yard work, golfing, jogging and had made a family tradition out of our camping trips. After retirement he continued playing golf, but also took up competitive racquetball at the local fitness club. He took competing very seriously and would often come home with bruises to show for it. One of Everett’s favorite things was playing with his kids and grandkids. Gloris often made mention of how Everett was just one of the kids. He always had a knack for finding something fun for all of the kids to do. Sometimes it would be board games, card games, giving piggy-back rides, or any outdoor activities. It always made him happy to see the kids having fun. Everett was preceded in death by his wife, Gloris, in 2015. He is survived by his daughter Jan of Albany, OR, his son Chris and daughter-in-law Barbara of Albany, OR, and his daughter Cheryl and son-in-law Craig of Cary, NC. He has eight grandchildren and 12 great grandchildren, with a 13th expected in October. He was a very loving and caring father and grandfather that will be greatly missed.

Everett Riddle Hunt was born on November 17, 1926 in Kellogg, Idaho to Everett Rowland Hunt and Grace Riddle. Mr. Hunt died on July 3, 2017 in Knightdale, North Carolina. His father was a pastor for the Congregational Church which took them... View Obituary & Service Information

The family of Everett Riddle Hunt created this Life Tributes page to make it easy to share your memories.

Send flowers to the Hunt family.