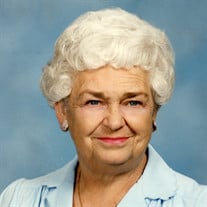 Born Eula Norrine Dubbels, April 26, 1924 in Rochester, MN. Died March 19, 2018 at Capital Nursing and Rehabilitation Center in Raleigh, NC. Eula met her high school sweetheart Otto Wilke at Rochester High School and graduated from there in 1941. Following graduation she attended business school in Minneapolis for one year before leaving for Sheppard AFB outside Dallas Texas where she worked alongside her sister as a bookkeeper during WWII. At the close of the war in the Atlantic she received a telegram from Otto informing her that he had been released from the Navy and they were “altar bound.” Eula married her high school sweetheart in Rochester, MN on January 3, 1946. They moved to Washington, DC where they made their home and raised their family. She was a dedicated wife and mother. In 1979 Eula and Otto retired to Hemet, CA where she lived until moving to Cary, NC in 2015. She loved the natural world, especially birds and flowers. She loved to see the Cherry Blossoms in the spring in Washington, DC and the azaleas at The National Landscape Arboretum. While living in CA she took many trips to well-known gardens and flower growing areas to experience nature’s splendor. She always had hummingbird feeders and was delighted when a bird nested in the potted plant stand on her back patio. Eula was committed to her Lord, her church, and to helping others. She took a special interest in the church school at St. John’s Lutheran Church in Hemet, CA donating her time and resources to helping the school and its children. She reached out to the broader community there to support the women’s shelter and to show the love of Christ to those less fortunate than her. Eula is preceded in death by her husband Otto; brothers Alton, Melvin and Gerald, and her sister Genevieve. She is survived by her brother Lowell and sister Avice; her children Patricia Otten (husband Mark), Robert Wilke (wife Cindy), and Diane Ocean (life partner Donna); grandchildren Leah (Otten) Robison (husband David), Julia (Wilke) Shapiro, and Daniel Otten (wife Khari); and great grandchildren; Eva, Jonah, Mark and Silas Robison, Dylan and Harrison Shapiro, Henry and Ellie Otten, and Chase Westerman. A brief Memorial Service will be held at Resurrection Lutheran Church in Cary, NC for friends and family on Monday, April 16 at 11:00am. Her ashes will be interred at Riverside National Cemetery in California alongside her husband Otto. Memorial gifts may be made to St John’s Lutheran School, 26410 Columbia St, Hemet, CA 92544, to your local chapter of Habitat for Humanity or to The Nature Conservancy.

The family of Eula Norrine Wilke created this Life Tributes page to make it easy to share your memories.

Send flowers to the Wilke family.