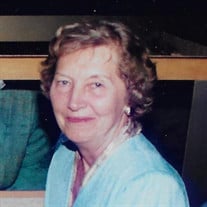 Eugenia Elizabeth “Liz” Coble Whaling was born on February 11, 1923 in Youngsville, NC and died on March 29, 2018 at Avendelle Assisted Living in Cary, NC. She was predeceased by her husband of 62 years, Charles John “Chuck” Whaling, last July. Also predeceasing Liz were her father, Reverend Thomas Stanley Coble, mother, Ila Elizabeth Harkey Coble, and four siblings: James Buchanan Coble, Edgar Moody Coble, Thomas Stanley Coble, Jr., and Mary Catherine Fern Coble Culbreth. She is survived by her devoted son Jonathan Charles “Jon” Whaling of Apex, NC and granddaughters, Melissa Lee Whaling and Laura Kathryn Whaling. Also surviving Liz are nieces Ann Coble Smith of Durham, Nancy Coble Damon of Charlottesville, and Cynthia “Cindy” Culbreth Withers of Charlotte; and nephews David "Cully" Culbreth of Denver, Richard "Rick" Culbreth of Denver, and Bill Coble of Durham. Liz was raised by her family in Durham, attending E.K. Powe School and Durham High School. As a daughter of a Methodist minister, she was able to attend Duke University Woman’s College tuition free, and graduated with an AB degree in English in 1945. While at Duke, Liz sang in the Chapel Choir. After graduation she worked as a secretary for a medical department at Duke Hospital. She eventually moved to Rochester NY to be closer to her sister Fern. There Liz met and married Chuck in 1955 after a whirlwind romance. Immediately afterwards, they moved to Maple Glen, PA, where Jon was born in 1959. The family also lived briefly in Ellicottville, NY, before settling in Ridgefield, CT for many years. There Liz worked as secretary to the Superintendent of Schools in Wilton and also in administrative support for IBM Instruments in Danbury. After retiring in 1993, Liz and Chuck moved to Fearrington Village, NC to be closer to their son and his family. Retirement created a new life that included worldwide travel, community service, and time for granddaughters, old hobbies and new friendships. Liz played bridge regularly and she and Chuck often hosted cocktail parties in their “close”. Liz was a volunteer reading tutor at the Perry W. Harrison Elementary School in Chatham County. She also was a volunteer driver with Fearrington Cares and worked at the Chatham Habitat for Humanity Restore in Pittsboro. Liz and Chuck were active members of Duke University Chapel, where she served in the prayer ministry, which she kept up after moving to assisted living. Liz and Chuck also served meals at the Durham Rescue Mission. Liz enjoyed playing puzzles and games, especially with her granddaughters. Liz was an extremely devoted daughter, wife, mother, and grandmother. She led a life of sacrificial love and service and exhibited a warm and charming personality. She was genuinely interested in others and enjoyed both light and serious conversation. Though dementia hampered her ability to speak during her last years of her life, she never let it affect her sense of humor or tendency to tease her caregivers. She brightened the room with her character even without saying a word. Her sweet and easy going nature will be forever cherished by family, friends, and caregivers. A memorial service will be held at Duke Chapel at 4:00 PM on May 4, 2018. In lieu of flowers, donations may be made in Liz’s memory to The Friends of the Duke Chapel Fund.

The family of Elizabeth "Liz" Whaling created this Life Tributes page to make it easy to share your memories.

Send flowers to the Whaling family.