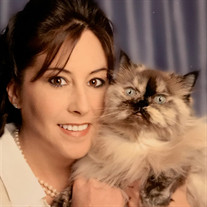 Elisabeth "Liz" Doyle, 48, passed away suddenly on the morning of March 12, 2018 at WakeMed Hospital in Cary, North Carolina. Liz was born in North Platte, Nebraska on April 17, 1969 to Jim and Betty (Metzler) Doyle. She was the youngest of eight children. Liz grew up in Stapleton, Nebraska. She attended and graduated from Stapleton High School, including one year as an exchange student in Germany. She received degrees from the University of Nebraska - Lincoln, and the University of Nebraska College of Law. After law school, Liz moved to Atlanta, Georgia and worked for the State of Georgia Department of Agriculture. Liz later moved to a position at Vericor Power Systems in Alpharetta, Georgia as in-house counsel. Her work there led to an opportunity to move to Europe to work for Europrop International. She resided briefly in Germany, and then lived for eight years in Madrid, Spain. While in Spain, Liz was responsible for the legal contract for the engines for the Airbus A400M military transport aircraft. Liz was quite proud of her contributions to the program. After returning to the United States, Liz begin writing a book. Her humorous memoir chronicles her adventures and misadventures as a fish-out-of-water in Spain and her travels about Europe. The book beautifully captures Liz’s love of travel and her desire and curiosity to explore the world. Liz was a wonderful cook and avid gardener. Her food, flowers, amazing sense of humor, and incredible strength of spirit will be missed by all. Liz was preceded in death by her parents Jim and Betty Doyle. She is survived by her loving partner and best friend Andy Wilhelm, siblings Loretta (Dave) Hamilton, Jim (Lisa) Doyle, Susan (Dan) Peters, Sally (Robert) Fitterer, John (Lindee) Doyle, Bob (special friend Dee Driggs) Doyle, and Pat (Carol) Doyle, and numerous nieces and nephews. A celebration of life will be held in Cary, North Carolina on April 15, with a private memorial service at a later date in Nebraska. In lieu of flowers, please donate to the ALS association, which is dedicated to fighting Lou Gehrig’s Disease.

Elisabeth "Liz" Doyle, 48, passed away suddenly on the morning of March 12, 2018 at WakeMed Hospital in Cary, North Carolina. Liz was born in North Platte, Nebraska on April 17, 1969 to Jim and Betty (Metzler) Doyle. She was the youngest of... View Obituary & Service Information

The family of Elisabeth Amelia Doyle created this Life Tributes page to make it easy to share your memories.

Elisabeth &quot;Liz&quot; Doyle, 48, passed away suddenly on the morning...

Send flowers to the Doyle family.