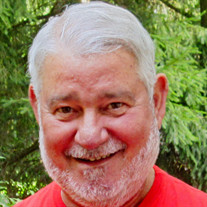 A loving husband, father, grandfather, and friend, Edwin Antonio Díaz Rivera, 74, a longtime resident of Portage, MI, passed away on June 2, 2021, in North Carolina, surrounded by his family. Edwin was born in San Juan and raised in Naranjito, Puerto Rico, on April 7, 1947. After graduating from high school, Edwin obtained a bachelor’s degree in science, from the Universidad de Puerto Rico. After the “UPI”, Edwin returned to his beloved Naranjito, to teach at the Escuela Superior de Naranjito. While still in Puerto Rico, Edwin later began working for the Pharmaceutical Company, Upjohn, where he met his future wife, Tati. In 1972, Edwin and Tati got married, and together had 3 children, Mauricio, Karla, and Claudia. Edwin’s professional career took him and his family on several journeys, where they lived in Ecuador, Mexico, and finally establishing roots in the Portage, MI, in 1986. The “jibarito from Naranjito” spent his 38-year career fostering lifelong friendships with people all over the world. Edwin’s professional accomplishments speak to his excellence as a salesman. He progressed through positions as Country manager in Puerto Rico, Ecuador, and Mexico; then as Director of Fine Chemical Sales for Latin America, Director of Contract Manufacturing, and retiring as Vice President of Fine Chemical Sales for North and South America. He was a recipient of the prestigious Upjohn Award and upon retirement, Pfizer CentreSource established the “Edwin Diaz Customer Service Award” in his honor. All who met Edwin instantaneously got to know him. His fast thinking and sharp sense of humor could not be matched. Edwin greatly respected and appreciated his friends, family, and colleagues. With Edwin, professional relationships very easily and naturally turned into friendships, because of his warm, open, and generous personality. He was loved and respected by all who met him, primarily because he took a sincere interest in knowing people personally, as unique and important individuals. This extended to everyone at every station in life, from the president of a company to the bellman or waiter at his favorite hotel or restaurant. He knew, remembered, and cared about the details of their lives. To know Edwin was to know a vivacious, charismatic, and loving man. With a funny story, unmatched passion, and unrestrained laughter, one would instantly feel welcomed and at home in his presence. Edwin’s friends would say he was one of those rare “brothers”, that life gifted them. All who knew Edwin would describe him as “being larger than life” and “living life with such joy”. Edwin’s values and priorities were always very clear: family and friends were at the top, with a passion for music, Formula 1, and his dear Puerto Rico. He was undoubtedly, one of the best ambassadors Puerto Rico could have asked for. Edwin spent his life building relationships and always putting his family first. His family meant more to him than anything else in the world; something he was passionate about when speaking with others. Edwin was unendingly proud of his children and their accomplishments. He later took immense joy in watching his granddaughters grow and develop their personalities. Edwin’s siblings would describe him as their “rock” and as an exemplary leader. Edwin’s patience, knowledge, and guidance helped build the foundation of his family. Edwin was predeceased by his mother, Livin Rivera Archilla; and younger sister, Provita López Rivera. He will be lovingly remembered and deeply missed by his wife of 48 years, Tati; 3 children, Mauricio Díaz (Renee), Karla Morelli (Andy), and Claudia Polhemus (Patrick); 2 granddaughters (Monica and Gabi); his 4 siblings Nilsa Ramos Rivera, Sandra López Rivera, Magda López Rivera (Israel), and Abigail López Rivera; and all of his dear friends around the world. While there is comfort in recognizing his pain is eased, and he has joined those who passed before him, there is a gaping hole for so many who will miss his strong embraces, laughter, jokes, and stories. Edwin was a special man who touched many lives, and whose memory and legacy will live on for years to come in the hearts of all who knew and loved him. A celebration of Edwin’s life will be held on Thursday, June 24, 2021, at 5:30pm, at Saint Ambrose Church (1628 East G. Avenue, Parchment, MI 49004), presided by Father Albert Kemboi and Monsignor Michael Hazard. In lieu of flowers, please donate to a charity of your choice, in Edwin’s memory.

A loving husband, father, grandfather, and friend, Edwin Antonio Díaz Rivera, 74, a longtime resident of Portage, MI, passed away on June 2, 2021, in North Carolina, surrounded by his family. Edwin was born in San Juan and raised in Naranjito,... View Obituary & Service Information

The family of Edwin Antonio Diaz Rivera created this Life Tributes page to make it easy to share your memories.