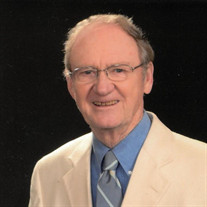 Edward Bliss Fillback, 83, Cary North Carolina, died April 21, 2021 He was born April 11th 1938 in Middletown CT to Edward and Natalie Fillback. Growing up he spent his summers in Old Saybrook CT where he fell in love with the water. He attended Bowdoin College where he was the president of Delta Sigma fraternity and graduated with honors and a degree in business administration. He worked as a marketing analyst in the electronics field until his retirement in 1999. He spent most of his adult life in Syracuse NY where he met his lovely wife Judy with whom he raised 4 daughters. He enjoyed spending time with his many friends, playing games, bowling and sharing jokes during cocktail hour. When he wasn't pulling pranks, and playing with the kids, he enjoyed woodworking, gardening, and creating his latest gadget to make any task easier. In 1986 he moved the family to North Carolina where he doubled the amount of friends he had. Everyone remembers Ed for his sense of humor, gentlemanly kindness, his love of parties and costumes and his aspirations to be a champion of trivia, words with friends, Jeopardy and the NYT crossword puzzle. He enjoyed a long retirement filled with sailing, travel, and many summers at the lake house in upstate NY with it's renowned sunsets. He loved everyone, and he always said he wanted to live forever because he was so happy, and had a great life. He will be missed dearly by those who survived him: his wife Judy, his children, Linda ( Frank Quagliano), Beth ( John Corvi), Suzanne ( Paul Pomeroy) Mary, and stepson Fred ( Mari De Luca). He is also survived by his sister Suzanne Millspaugh, and sister in law Jean Young. He has eight grandchildren, and six great grandchildren: Jennifer Gimelli, Edward Conway, Mary Conway, Peter Corvi, Ryan Corvi, Ethan Pomeroy, Emily Stein, Madelyn Stein, Kailea Conway, Andrew Gimelli, Bryce Conway, Lucas Conway, Makenzie Ryan, and Charlotte Conway. He was predeceased by his brother in laws, Charles Millspaugh, John Young and Michael Young. The family will receive friends Thursday, April 29, 2021 from 10:30 to 11:00 am at St. Mary Madgalene Catholic Church, Apex, NC. There will be a Mass starting at 11:00 am at St. Mary Madgalene Catholic Church. Inurnment will follow the mass at St. Andrew The Apostle Catholic Church, Apex. In lieu of flowers, those considering memorial contributions may make them to Western Wake Crisis Ministry. The mass may be viewed at the following link: https://youtu.be/pg1pr_ghE10

Edward Bliss Fillback, 83, Cary North Carolina, died April 21, 2021 He was born April 11th 1938 in Middletown CT to Edward and Natalie Fillback. Growing up he spent his summers in Old Saybrook CT where he fell in love with the water. He attended... View Obituary & Service Information

The family of Edward Bliss Fillback created this Life Tributes page to make it easy to share your memories.