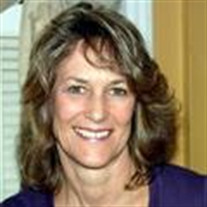 Drusilla Showers, 58, of Cary, North Carolina passed away September 2, 2015 at Wake Medical Center, Cary. She was born February 3, 1957 to George Dallas Ramsay and Mary Shaw Lowe in San Jose, CA. Always a California girl at heart, Dru was incredibly active, playing tennis, dancing, and competing in gymnastics as a child. She attended Willow Glen High school, graduating in 1975. Her love for teaching began early, sharing her passions for activity and gymnastics as an instructor at a dance studio in San Jose. After completing her undergraduate degree at the University of California at Santa Cruz, she enrolled in a Masters degree program at the University of Hawaii at Manoa. While in Hawaii, she met and fell in love with William James Showers Jr. and the two moved to North Carolina to start a life together. The couple married in 1983 and had two children together, Christopher and Kimberly, before separating in 1992. Dru continued teaching children throughout her life and after completing her Masters degree at the University of North Carolina at Chapel Hill, began a lifelong career in speech therapy. She has interacted with thousands of children over the course of 30 years teaching speech in the Raleigh Durham area. Dru lived in constant motion and her social life brought her immense joy. She also enjoyed long mornings in bed, curled up with a book and a cup of coffee. She was an ideal travel companion, loved soaking up the sun, felt comfortable talking to anyone, and enjoyed vacations hiking the mountains of Lake Tahoe. She recently rekindled a love for tennis, enthusiastically playing at least once every week until the end of her life. Dru passed unexpectedly from an acute infection, with both her children at her side. She is survived by her children, Christopher Ramsay Showers of New York City, NY and Kimberly Ann Showers of Seattle, WA; her sister Tucker Elizabeth Ramsay of Carmel, CA, her brother Clayton Shaw Ramsay of Santa Cruz, CA, her brother Scott Martin Ramsay of Monterey, CA, and her mother Mary Lowe Mason of Incline Village, NV; her future son-in-law Derrick Ray Foss of Seattle, WA; and her countless friends and social networks. Her father, George Dallas Ramsay Jr. preceded her in death. Her family will hold a celebration of her life on September 9th from 6pm to 9pm at the Oxxford Hunt Clubhouse, 120 Fallsworth Drive Cary, NC 27513. Online condolences may be made to www.wakefuneral.com

The family of Drusilla "Dru" Ann Ramsay Showers created this Life Tributes page to make it easy to share your memories.