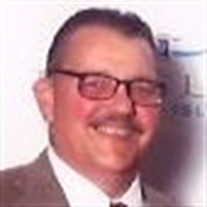 Donald Richard Wallace, 61, passed away after a five year battle with prostate cancer on Saturday, January 5th, 2019 at his home, surrounded by family. Don was born on February 28th, 1957, in Chillicothe, Ohio, to C. Wayne and Betty Lou Wallace. Don graduated with a degree in Aeronautical Engineering from Embry-Riddle University in 1988. He began his career as a traveling engineer and traversed the world working as a Mechanical Engineer, specializing in piping design and plumbing systems. He also spent many years designing and consulting for various biotech companies. He settled in Cary, NC and for the past 13 years he was a self-employed engineer, as owner of DRWallace & Associates, LLC. Don is preceded in death by his father, C. Wayne Wallace. He is survived by his wife, Nancy (Sheriff) Wallace; his mother, Betty Wallace, of Lakeland, FL; his sisters, Roxanne (Wallace) Blough and Wendy (Wallace) Hamic, both of Lakeland, FL; his brothers, David (Sarah) Wallace, of N. Redington Beach, FL, Dr. W. Jeffrey (Barbi) Wallace, of Kingsport, TN; step-children Robert (Venetia) Sheriff of San Clemente, CA, Adam (Lauren) Sheriff, of Boston, MA, Kim (Eric) Gossick, of Holly Springs, NC; and numerous nieces, nephews, and grandkids. Don will always be remembered for being the loving, caring person who literally would stop to smell the roses. He was never in a hurry to get anywhere. But once he arrived, he knew how to make the most of where he was. His presence in a room could not be missed because of his beautiful smile and his great big mustache. And those big bear hugs - they were the best! We have fond memories of him rolling around on the ground, playing with all of his nieces, nephews, and his dog, Piper. His brothers cherish the many motorcycle rides they took together. From the PCH to the Outer Banks, and all points in-between, it was always about the journey for Don, more than the destination. So many laughs, so many good times, and such a big, big heart. You will be missed so very much ‘Dink,’ but you will never be forgotten. There’s a huge hole in all of our hearts. Rest in peace! A memorial service will be held at Faith Lutheran Church, in Lakeland, FL, on Sunday, January 20th, at 2:30 PM. Condolences may be sent to the family at www.wakefuneral.com.

The family of Donald Richard Wallace created this Life Tributes page to make it easy to share your memories.

Donald Richard Wallace, 61, passed away after a five year battle...

Send flowers to the Wallace family.