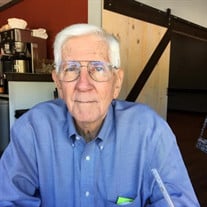 Don Edward Powell, of Raleigh, North Carolina, died on December 8, 2020, after a long battle with Alzheimer’s and side effects of COVID. Don was born on June 19, 1937 in Griffithville, Arkansas to the late Solen William and Rilla Maddox Powell, of Griffithville, Arkansas. He is a graduate of Griffithville High School where he was a star basketball player. After marriage, Don and his wife, Louise, settled in West Memphis, AR, where they raised their family, developed life-long friendships, and spent time giving to the community and Missouri Street Church of Christ. He also enjoyed spending time at his home on Greers Ferry Lake, Arkansas, with friends and family. He had a long career working with his brothers C.K and Jack as part of Powell Brothers, Inc. truck driving, transportation logistics, and commercial real estate investing. Upon his retirement they moved to Cary, NC, to spend time with his daughter Kriste, Son in law Dean and much-loved granddaughter, Kenzie. Don found pleasure in traveling, yard work, and volunteering at Raleigh Church of Christ. Don will be remembered as a gracious and giving individual with his time and generosity. He loved to help young families succeed assisting them with gifts and services to provide them with a better life. He has always helped others such as neighbors, friends, and families. Don is survived by his wife of 64 years, Louise Pratt Powell of Raleigh, NC, daughter Kriste Powell Nunnally, Son in law Dean Nunnally and granddaughter Mackenzie of Cary, NC, sister Mildred Powell Chandler and her husband Dr Bill Chandler of North Little Rock, AR, and his very large extended family. He was preceded in death his son, Kerry Don Powell of West Memphis, AR, his brothers Paul Powell, CK Powell, and Jack Powell, his sisters Geraldine Powell, Mamie Ruth Neaville, Juanita Smith, and Flora Ann Ray all of Arkansas In lieu of flowers the family asks that memorials be made to Raleigh Church of Christ, Families First Foundation Mission of Arkansas, and TROSA of Durham, NC. Arrangements are entrusted to Wake Funeral and Cremation Services, Cary, NC.

Don Edward Powell, of Raleigh, North Carolina, died on December 8, 2020, after a long battle with Alzheimer&#8217;s and side effects of COVID. Don was born on June 19, 1937 in Griffithville, Arkansas to the late Solen William and Rilla Maddox... View Obituary & Service Information

The family of Don Edward Powell created this Life Tributes page to make it easy to share your memories.

Send flowers to the Powell family.