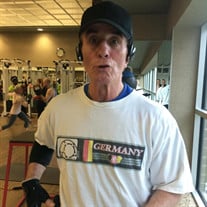 A very amazing man was called to heaven by his Lord and Savior. David was the husband and best friend to Christy Yousefnejad for 43 years. He was a devoted and supportive father to his son Anthony and daughter Stephanie. His influences in our lives gave us strength and courage, especially during these last years. David was always reminding us that Jesus was in control of all that was going on in our country and in the world. He loved America and was sad to see recent events in America after having already experienced losing his beloved Iran in 1979. He worked tirelessly to get his family to America so they could be joined together in a new culture, that while diﬀerent, would support their Christian beliefs and give them a chance to start again. He came to USA to go to college but did so much more. He first went to live with his very good Assyrian friends, Victor and Albert, who gave him mentorships in how to be a happy and free living American in the city of Chicago. He waited tables and always had tales about how to get good tips from wealth customers. He learned English from his Chicago experience and then moved on to be with his sister to attend Warren Wilson College where she was already well along her way being a college darling with many friends for David to get to know. David then moved on to UNCC where he finished his degree in Chemistry while playing soccer on scholarship. After graduation he had no trouble finding work in his field in Charlotte. It was in 1972 while sitting at a Shoneys Restaurant, he meet the girl that would be his wife for 43 years. They married on Easter Sunday night on 3/26/1978 and drove away to live in Lexington Kentucky where David has been oﬀered his dream job at The National Institute of Drug Abuse as a Research Chemist. While in Lexington, his son and daughter were born. The usual concerns about fatherhood vanished at the birth of Anthony and Stephanie and they changed his heart forever and he was devoted to them for all his days. Later his research team was move the family to Baltimore Maryland. In Maryland he was a soccer coach for his son and lead the team to State Champions. His daughters love of soccer kept him involved in her games also, even coaching from the sidelines. Actually, he coached more than a few times from the bushes at the direction of many a referee. He never tired of traveling to see both his kids games, many times on the same day and in opposite directions. He loved soccer but never loved it more than when his kids were on the field. He wanted his family to experience everything he had loved, so he insisted that everyone had to ski. First the East Coast and then to Colorado, Utah and California. Those were expensive adventures but we al looked back and laughed about how we didn’t care the cost because the experience of skiing together as a family was worth it. David’s first priority was his family. His motive in life was around how it would aﬀect his family. When Christy had a job opportunity to move the family from Maryland to North Carolina, he said it would be a good decision and happily worked to transition the family to North Carolina. He lived in an eﬃciency apartment near his work and did some part time work in a lab to pass the evening hours and earn some extra money to pay for his flight to Raleigh for the weekend. After 2 years of commuting to Raleigh, his early retirement letter finally came and he was in Apex for good. The kids were just hitting teenage years and he was in the perfect place to keep things in line. While he guarded the house from marauding teenagers coming to the house after school, he also worked with landscapers and brick masons to built marvelous retaining walls for his wife who was always amazed at the end of her stressful day to see the progress. As the kids moved on the college and then marriage, he and Christy grew closer to tackled together all that life would throw at them. They enjoyed the house and yard and as they would look forward to the kids and their granddaughter coming home for visits. David is preceded in death by his mother Nostrat Baga, and father Hassan Yousefnejad, his brother Joseph Yousefnejad, and sisters Nahid and Azeen, and his father in law, Gordon Spencer. He is survived by his wife, Christy, son Anthony and his wife Kristy and their daughter Spencer, and daughter Stephanie, mother in law Dean Spencer and sister and brother in law Mark and Cathy Ashton and their 3 children Hannah Smith, Zack Ashton, Nolan Ashton, along with their 8 grandchildren. Brothers, Sasan Yousefnejad and Dara Yousefnejad and his daughters Nasim and her daughter Ella, Sara Gallagher and her husband Keenan and daughter Sayeh, and daughter Nazanin. Sister Simin and her sons Babak and Behrang and his wife Heidi, sister Maryam Beyer, Brother in Law Jack, and their sons William and his wife Rosie, Benjamin, and his wife Brianne and Jack Beyer. A Celebration of David's Life will be held July 6, 2021 at First Baptist Church of Cramerton, 235 8th Ave, Cramerton, NC 28032, from 11am until 12 noon.

A very amazing man was called to heaven by his Lord and Savior. David was the husband and best friend to Christy Yousefnejad for 43 years. He was a devoted and supportive father to his son Anthony and daughter Stephanie. His influences in our... View Obituary & Service Information

The family of David Yousefnejad created this Life Tributes page to make it easy to share your memories.

A very amazing man was called to heaven by his Lord and Savior....

Send flowers to the Yousefnejad family.