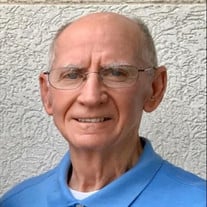 Reverend David Edward Westerfield, 79, went to be with his Heavenly Father on April 30, 2020. He is survived by his beloved wife of 24 years, Cheryl Case Westerfield, his sister Eliza Westerfield of Richland,MS, his step-children Rhonda(Bill) Stewart, Ramona(Yancy) Eubanks, David(Karen) Longstreet and Reneè(Brian) Nelson, his grandchildren Casey(Kyle), Will(Shelby), Alex, Kyle(Libby), Austin, Cameron, Noah, Levi, Micah, Faith and Ty, and his great-grandchildren Osley, Shepherd, William, Layton and Tucker. He was preceded in death by his parents Irvin and Gertrude Westerfield, brother and sister-in-law Bobby and Judy Westerfield and granddaughter Emma Longstreet. “Dave” graduated from Central High School in Jackson, MS as an Eagle Scout and then attended the University of Southern Mississippi earning a BS in Business Administration. His aspiring role as a pitcher on the Hollandale Hi Boys semi pro baseball team was cut short when he was called into military service. His service began in college in the Army Reserves and, after graduating, he joined the US Marine Corps and was called to serve in Vietnam where he fought bravely in the Battle of Huế and earned many medals including the Bronze Star. Dave continued his service to his country by joining the US Army. While in the Army Dave began to feel a call to join the ministry and began preaching on the weekends. After serving 27 years in the military, he retired as Major Westerfield and began a life of full- time ministry. . He attended Westminster College (Bachelor of Theology), Wesley Biblical Seminary (Master of Theology) and NOBTS (Master, Religious Education). His career in the ministry included pastoring multiple churches in MS, leading revivals, planning retreats and seminars, and planting churches. He conducted mission trips in the US and abroad. After 30 years of service in the ministry, he retired officially but continued an active life sharing his faith and desiring all to have a personal relationship with Christ. After retirement, he moved to NC becoming active in Apex Baptist Church and being “Papa Dave” to his children, grands, and great grands. He stayed busy attending soccer, lacrosse, baseball, football and basketball games as well as track meets, dance recitals and school plays. He enjoyed playing golf , traveling, and studying God’s word with his faithful dog, Barney, by his side. He will be dearly missed by his friends and family but we rejoice in the hope we will all be reunited again in Glory. A private family graveside celebration of life will be held at Apex Cemetery on May 4, 2020. In lieu of flowers, please make a donation to NC or MS Baptist Men’s Disaster Relief Fund.

Reverend David Edward Westerfield, 79, went to be with his Heavenly Father on April 30, 2020. He is survived by his beloved wife of 24 years, Cheryl Case Westerfield, his sister Eliza Westerfield of Richland,MS, his step-children Rhonda(Bill)... View Obituary & Service Information

The family of David Edward Westerfield created this Life Tributes page to make it easy to share your memories.

Reverend David Edward Westerfield, 79, went to be with his Heavenly...

Send flowers to the Westerfield family.