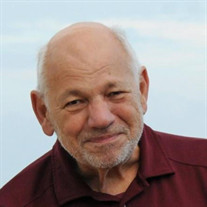 David A. Pesapane -- loving father, grandfather and brother, respected educator and football coach, devoted Boston College Eagle (67) -- died on Friday, May 28 in Raleigh, North Carolina. He was 75. Dave was born on December 10, 1945 in New Haven, CT to Joseph and Elizabeth (Betty) Pesapane. He attended Notre Dame High School where he played on the 1962 state championship football team and went on to play for Boston College. He later coached his own state championship team (1978) at St. Bernard High School in Uncasville, CT. Dave was a longtime volunteer for the Connecticut Special Olympics where he organized sports clinics and inspired high school athletes to serve as volunteer coaches. Dave was a young teacher when he met his future wife, Grace Franco. They married in February 1973 during a blizzard and went on to raise their four daughters in Deep River, CT, where they lived until Grace passed away in December 2015 after 42 years of marriage. A lifelong resident of Connecticut, Dave retired to Carolina Arbors in Durham, NC five years ago to be nearer to family. Together with his youngest daughter Alicia, who has special needs, Dave made the Triangle-area their home away from home, and enjoyed exploring North Carolina from the hills of Asheville to the shores of the Outer Banks -- pushing the mileage on his late wife’s ‘98 Lexus over 231,000. And he loved the tradition of having Sunday suppers at his daughter Laurie’s house in nearby Apex, NC. He found community and friendship at Carolina Arbors. In addition to organizing the neighborhood Lotto club, Dave enjoyed socializing with neighbors over progressive dinner parties and holiday picnics, playing in the community poker club and tending vegetables in the community garden. Dave was a friend for life to all he knew. He lived a blessed and happy life and took delight in the everyday gifts around him. A plaque in his living room reads, “The most important thing in life is family. Followed by football. Then food.” Indeed, family meant everything to Dave -- and his youngest daughter Alicia, born with Down Syndrome, was the light of his life. He took great care of Alicia over the years, and vice versa. It’s heartbreaking to imagine her life without him in it. A proud and loving family man, Dave is survived by his four daughters, Amy Lally (CA), Laurie Parsons (NC), Karen Zadravec (MD) and Alicia Pesapane (NC), his seven grandchildren, Allyson Zadravec, Katherine Lally, Jonathan Zadravec, Sean Lally, Kaitlyn Lally, Ryan Parsons and Evan Parsons, his sister Elizabeth (Betsey) Pesapane, brother Steven Pesapane and sister-in-law Joyce Pesapane, his brother-in-law John Franco, sons-in-law Joseph Lally, Martin Zadravec and Daniel Parsons, his nieces Risa Pesapane, Olivia Hinnau, Liza Zanca and Beth Gilliam, his nephew Andrew Hinnau and many cousins and friends. Gone too soon, Dave had more life to live and more love to give. He will be forever missed. Services will be held in Dave’s home state of Connecticut later in June. In celebration of his life, donations can be made in Dave’s name to Gigi’s Playhouse Down Syndrome Achievement Center, Raleigh (https://gigisplayhouse.org/raleigh).

The family of David A. Pesapane created this Life Tributes page to make it easy to share your memories.

Send flowers to the Pesapane family.