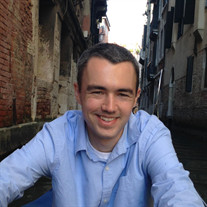 Daniel Paul Schreiber, 31, of Morrisville, NC passed away on Friday, April 13, 2018 at Duke University Medical Center. Daniel was born in Boynton Beach, FL on August 22, 1986 to Henry Paul Schreiber and Elizabeth Ann (Edwards) Schreiber. Daniel fought a brave and lengthy battle against brain cancer. His positivity throughout the battle shone and lifted us all. He was never negative or bitter, and was humble when we praised him for his strength and courage. Daniel didn’t let anything stop him from living and enjoying the time he had left. He continued to look to the future, but lived in the moment. We are all proud of how hard he worked toward earning a degree in IT and in how loving and devoted he was to his wife, family, and friends. Some of his recent accomplishments included completing the Angels Among Us 5K just 5 weeks after brain surgery, continuing to study until the very end, enjoying travel and planning his and Jill’s next adventures, and completing a quest for the best gelato in all of Italy. Daniel was so funny and witty, he always knew how to lighten any situation. When Jill was bored or stressed, he wrote her funny stories via text message. He was always coming up with new ways to have fun, like a medieval bow and arrow contest with friends in the park. He loved Halloween, dressing up, decorating, going to the catacombs in Paris, you name it. Daniel made things more fun by dancing and encouraging others to dance, especially at weddings. Daniel’s heart was with his family and friends. He was a wonderful big brother. Daniel would advise Michael on all things car, play video games, and just talk about everything with him. Daniel always watched out for Laura, she could always count on him to rescue her if she got in trouble. Most importantly, he taught her the very necessary life skill of using a can opener! Daniel was a loving, thoughtful son who put his concern for his parents before that of himself. He worried about the time they spent taking him to appointments and classes, while they cherished this time and will miss it, and him, dearly. Not only was Daniel a loving husband, he was Jill’s best friend. He and Jill could be in a room full of people and only see each other. He cherished his friendships and built them to last. So many friends shared memories and love with Daniel and his family during his last stand against brain cancer. We are so grateful for their friendship and support. Daniel is survived by his wife: Jill Ashley (Miller) Schreiber; Parents: Beth and Henry Schreiber; brother: Michael Schreiber of Davenport, FL; almost sister-in-law, Abbey O’Brien; sister: Laura Schreiber; maternal grandmother, Ann Key and husband, Scott Key of Annapolis, MD; maternal grandfather: Bob Edwards and wife Marion Edwards of Bedford, TX; paternal grandparents: Bill and Betty Schreiber of Bracey, VA. He is also survived by his cuddly and noisy puppies, Duke and Lady. A celebration of Daniel’s Life will be at 2:00 pm on May 19th at 519 Church, 1100 Perimeter Park Dr, Suite 118, Morrisville, NC 27560. The family will receive friends to share and enjoy Daniel's favorite chocolate treats following the service. Memorial contributions may be made to the Preston Robert Tisch Brain Tumor Center (https://tischbraintumorcenter.duke.edu). Online condolences may be made at www.wakefuneral.com.

The family of Daniel Paul Schreiber created this Life Tributes page to make it easy to share your memories.

Daniel Paul Schreiber, 31, of Morrisville, NC passed away on...

Send flowers to the Schreiber family.