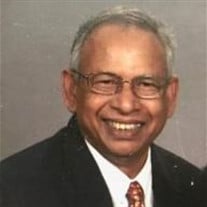 Daniel Arathil Joy, 77, died January 17, 2018, with his family by his side in Raleigh, North Carolina. A memorial service is scheduled for Saturday at St. Andrew's Catholic Church, Apex, NC. Graveside service and Receiving of Friends to follow. He was born August 18, 1940, in Cheriyanad, Kerala, India to Daniel Oommen and Saramma Daniel. They were farmers who valued family and education. Daniel was the first in his family to go to college, majoring in accounting, then paved the way for others to follow. Though he had a successful professional role as an accountant for the Indian government, he sacrificed it to come to the United States – the land of opportunity, for his family. Along with his wife, Grace Joy, they journeyed around the globe. He believed that if you have trust in God, are willing to sacrifice and work hard, your dreams will come true. He demonstrated professional success by starting over and working his way up from being a minimum wage stock boy at Rose’s department store to eventually, the store manager. At night, he not only studied to earn an MBA, he was asked to stay on to teach some courses. His greatest success, however, he would tell you, was being blessed with his loving family and friends. His management roles took the family throughout the Southeast and Atlantic Coast, but he always called the Triangle (Raleigh-Durham-Chapel Hill, NC) home. Upon retiring from retail management, he returned to the Triangle and pursued entrepreneurship in real estate investment. As one of the founding members of the Greater Triangle Kerala Association, he was the president from 2001-2002. He was also an active member of St. Francis of Assisi Catholic Church, Raleigh, NC. His interests included spending time with family and friends, the church and playing cards. He devoted much of his time and energy as a mentor to family, friends and the community. Mr. Joy is survived by his wife of 49.9 years, Grace; 2 sons and their spouses, Saju and Belinda Joy (grandchildren – Elijah & Joshua), Anil and Smitha Joy (grandchildren – Benjamin & Alexander) – and several brothers, cousins and extended family in the area. In lieu of flowers, donations may be made to: St. Gregorios Indian Orthodox Church (church founded by his cousin & brother in Christ, Rev. M.K. Thomas):225 Bashford RdRaleigh, NC 27606

Daniel Arathil Joy, 77, died January 17, 2018, with his family by his side in Raleigh, North Carolina. A memorial service is scheduled for Saturday at St. Andrew's Catholic Church, Apex, NC. Graveside service and Receiving of Friends to follow.... View Obituary & Service Information

The family of Daniel Arathil Joy created this Life Tributes page to make it easy to share your memories.

Send flowers to the Joy family.