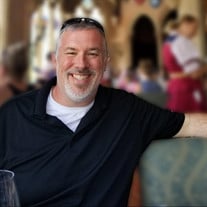 Daniel Patrick Hopkins, husband and father to two beautiful young girls, died unexpectedly in Raleigh, NC on February 19, 2021 at the age of 47. Born on December 1, 1973 in Boston, Massachusetts to Francis and Ann (Tibbetts) Hopkins, Dan spent many of his formative years in Columbia, Maryland and attended Mount Saint Joseph High School in Baltimore, where he forged a lifelong bond with friend, Tom Balsamo. From the eastern shore of Maryland, Dan graduated from Salisbury State University in 1996 with a BS in Accounting. He worked in finance until opening his own landscaping company, combining his business sense and interest in garden design. Dan met his wife, Jill at a pre-wedding event for his friend Tom in 2000 and a few years later, he and Jill started dating. Dan and Jill were married October 16, 2010 and were living in North Carolina by that time. Dan was an accomplished professional, but it was not until the birth of his daughter Megan in 2012, that his passion and calling was truly revealed - fatherhood. With this new chapter, Dan fully dedicated himself to his family, staying at home to allow his wife to pursue her career while he managed the household. By the end of 2018, the family celebrated the arrival of their second child, Rory, who brought endless joy to Dan. He cherished each and every moment spent with his daughters. Dan will be remembered fondly for his love of the outdoors, his fierce loyalty and his savviness with technology. He enjoyed spending time landscaping in his yard, planning the next big project, composting, and creating memories with his family. Dan is survived by his parents; his wife, Jill Baldwin Hopkins and his two children, Megan Kate and Rory Fiona. He is also survived by his sisters Elizabeth Reid (Kerry) and Pamela Zito (Sean) and nephews Devin, Benjamin, Samuel and Peter. Dan will be laid to rest at St Paul’s Episcopal Church in Cary, NC on February 27, 2021 at 10am. A small, private service will be held for immediate family only, due to COVID-19 restrictions. Other close family members and friends will receive information for the live-stream link should they wish to view the service. In lieu of flowers, the family asks that donations to Dorcas Ministries or the American Heart Association be considered.

The family of Daniel Patrick Hopkins created this Life Tributes page to make it easy to share your memories.