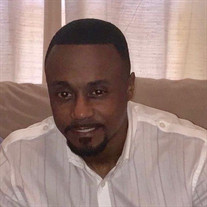 Damian Van Fields was born on November 4, 1980, in Pontiac, Michigan, to Raymond Blair Fields, Sr. and the late Darlene Annette Fields. He was called to heaven on Monday, June 17, 2019. From the beginning, Damian ensured his legacy would live on forever. He was the best swimmer in the family, an amazing drummer in the Pontiac Northern High School Marching Band, an athlete, and the only child who shook the baby crib until it fell apart. Most importantly, he accepted Christ before he was a teenager and sang in the church choir, participated in numerous church sponsored events, and served in the role as a Youth Usher at Welcome Missionary Baptist Church, Pontiac, Michigan. Shortly after he turned 13 years old, he was diagnosed with Scleroderma. He accepted this diagnosis as a blessing and viewed it as a minor barrier in his life. Damian quickly adjusted to the new him and was committed to showing the world how to beat the odds. After graduating from Pontiac Northern High School in 1999, Damian attended ITT Technical Institute and earned an Associates in Applied Science, Electronic Engineering Technology, in 2002. Shortly thereafter, he felt the time was right to marry his high school sweetheart, Angela Shockency, on July 18, 2003. Over the next 15 years, they were blessed with three wonderful children; Damian V. Fields II, Janiyah L. Fields, and Devin D.B. Fields. Although Scleroderma slowly hardened his hands and lungs to the point he had to have a double lung transplant on February 26, 2017, Damian continued to work harder. From 2014 through 2019, he earned a Bachelor of Science in Information Systems and Cyber Security, Network + and Security + certifications, CASP, and became Duke University first Scleroderma double lung transplant patient in over a decade. He held numerous jobs in the private, public, Department of Defense, and National Defense sectors. Although Damian’s condition prevented him from directly serving in the military, his reputation and clean record allowed him to be approved for a Top Secret Clearance. His skills and qualifications were used directly to support Special Operations Forces, Marines, and Soldiers on the ground in Afghanistan, Iraq, and Africa. Damian enjoyed being a servant of God, spending time with his family and friends, riding his motorcycle, hosting Floyd Mayweather fights, and serving others. He has inspired hundreds of people and leaves his father, Raymond B. Fields, Sr.; wife and children, Angie Fields, Damian V. Fields II, Janiyah L. Fields, Devin D.B. Fields; sister and brothers, Katrina D. Fields, Raymond B. Fields, Jr. (Minako), Mario P. Fields (Nicole) and a host of aunts, uncles, nieces, nephews, cousins, in-laws, colleagues, and friends to carry on his legacy.

Damian Van Fields was born on November 4, 1980, in Pontiac, Michigan, to Raymond Blair Fields, Sr. and the late Darlene Annette Fields. He was called to heaven on Monday, June 17, 2019. From the beginning, Damian ensured his legacy would live... View Obituary & Service Information

The family of Damian Van Fields created this Life Tributes page to make it easy to share your memories.

Send flowers to the Fields family.