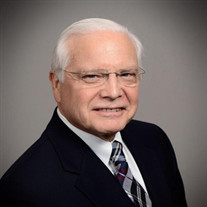 Craig Howison Sours, age 70, passed away peacefully at Transitions LifeCare Hospice Home after a long and valiant battle with vascular dementia. Born in Richmond, Virginia on June 14, 1950, Craig was the son of Charles Lewis Sours and Helen Briggs Sours, both of whom preceded him in death. Craig grew up in Annandale, Virginia and was a 1968 graduate of Annandale High School, where he was active in student government and was a member of the wrestling and football teams. In 2019, Craig was honored to be inducted into the Annandale Athletics Hall of Fame along with the other players from the 1967 state champion football team. As he regularly reminded folks, they were ranked third in the nation that year. Craig graduated from the University of Virginia in 1973 and went on to enjoy a successful career in technology sales. He retired from Hewlett Packard in 2009 and, while his health permitted, spent his retirement years participating in church activities, enjoying various continuing education classes and walking with his dog, Nick. Craig was a devoted member of St. Paul’s Episcopal Church in Cary. Survivors include his wife of thirty years, Paula Barnes Sours; his son, Austin C. Sours and his wife, Kristin, and their daughter, Addison, of Woodstock, Maryland; a brother, Dr. Charles L. Sours and his wife, Barbara, of Fairfax Station, Virginia; a sister, Dr. Elaine K. Sours of Manassas, Virginia; and many other extended family and long-time friends. Craig's ashes will be inurned in the columbarium at St. Paul's Episcopal Church at an appropriate time in 2021. The family hopes to hold a celebration of Craig’s life when gathering in fellowship is safe again. Memorial gifts may be sent to St. Paul's Episcopal Church (221 Union St., Cary, NC 27511 or online at https://www.stpaulscary.org), Transitions LifeCare (250 Hospice Circle, Raleigh, NC 27607 or online at https://transitionslifecare.org), or to the charity of your choice.

The family of Craig Howison Sours created this Life Tributes page to make it easy to share your memories.

Send flowers to the Sours family.