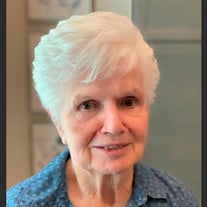 Cornelia "Connie" Whitfield Molinaro passed away Thursday, June 9th at Transitions Hospice in Raleigh, NC. She is survived by her children Cindy and Mark (and their spouses Joe and Allison), and her grandchildren who she loved very much, Alex, Joseph, Celyn, Maren, and Linnea. She is also survived by many nieces and nephews, and a very special friend, Burke Holland. Connie was born February 15th, 1938 in Person County, (Timberlake) North Carolina. She was the daughter of Floyd Whitfield and Ina (Brooks) Whitfield. Like many in North Carolina back then, she was raised on a small Tobacco farm. She had 5 brothers and sisters. Her childhood was one of economic hardship, but with a lot of love in the family and learning the value of hard work from an early age. The farm did not have electricity until Connie was 6 years old and no indoor plumbing until she was 10. Her mother died when she was 7 years old. Can you imagine losing your mother as a 7 year old child. And then her Father passed when she was 17. Connie's sisters Dorothy and Joyce helped raise her with Joyce being especially close. Connie was the youngest of the siblings and they all passed before her. Connie spent many years of her childhood education in a one room school house. In her senior year, the FBI visited her small high school (of all places) recruiting future employees. Connie left Person County at 18 and moved to Washington DC to work for the FBI. While in DC, she met Francis "Mo" Molinaro who was in the Air Force and worked at the Pentagon. They had two kids (Cindy and Mark). Connie had an exciting life and Mo's job took them all over the world and then her job later did the same thing. They were stationed in Stockholm Sweden from 1969-1973 and everyone in the family greatly enjoyed living there. They made great Swedish friends and had a lot of fun times in the Summers (thanks to their Swedish friends boat), and learned how to enjoy themselves in the long winters. They then were stationed in Blacksburg Virginia from 1973-76 before getting the chance to go back to Sweden for 3 more years. The second tour in Sweden from 1976-79 (what her son Mark calls the "ABBA" years) was another great time. The whole family recognized how lucky they were to experience this place and that time. Cindy and Mark have many great memories of those years. Mo was then stationed at Griffiss Air Force Base from '79 to '82 Rome, NY, and everyone disliked living there and were glad to leave. In 1982 Connie got a job with the State Department Foreign Service and was assigned to NATO in Brussels Belgium. Mo was assigned to Hahn Air Base in Germany and they were apart for those two years. Connie loved Brussels as did all her family. Europe in the 70's and 80's was such a great place to live and have a family. We all recognized how fortunate we were to have had this experience. Connie and Mo then moved to Cairo in 1985 which they really enjoyed and then to Vienna, and then Amman Jordan in 1990. Connie and Mo were divorced in 1991 and she took a post by herself in San Jose Costa Rica, and after that Ankara Turkey, and then back to Vienna. She retired to Cary NC in 2003. Connie always loved shopping, especially shoes and clothes in general. She enjoyed retirement and was a great help to Mark by watching her grandkids and she enjoyed spending time with them and taking them to do things, and enjoyed being with Cindy and her family. Family was very important to her and she also spent a lot of time with her siblings which was a blessing. Connie was a strong Christian woman whose actions epitomized her faith. She enjoyed going to church every week and was very involved. She went on multiple missions to help the less fortunate, sometimes due to natural disasters. In 2018, Connie met a special friend (Burke Holland) and they were pretty much inseparable till her passing. Burke was truly a blessing to Connie and she to him. Cindy and Mark are very thankful to Burke. They had a great time always going out and spending time together. Connie experienced vascular dementia the last couple years but still was with us enough to enjoy visits with her family. Cindy and Mark would like to thank the excellent care at WakeMed in Cary, and especially the wonderful people at Transitions Hospice whose kindness was incredible. Mom is with God and her brothers and sisters, and we find comfort in that and in a life truly well lived. Services for Connie will be 11AM Tuesday, June 14th at Westwood Baptist Church in Cary, and she will be entombed at Wake Memorial Cemetery in Cary, NC.

Cornelia "Connie" Whitfield Molinaro passed away Thursday, June 9th at Transitions Hospice in Raleigh, NC. She is survived by her children Cindy and Mark (and their spouses Joe and Allison), and her grandchildren who she loved very much, Alex,... View Obituary & Service Information

The family of Cornelia W. Molinaro created this Life Tributes page to make it easy to share your memories.

Send flowers to the Molinaro family.