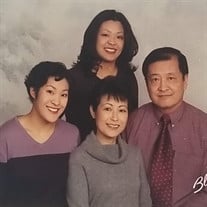 Cheng-Mong Lin passed away early in the morning of July 4, 2020. He is survived by his two daughters, Carol Lin-Murphy and Kimberly Lin; and his sisters, Gin-Lan Lin, and Ching-Yun Lin. He has 4 grandchildren: Theodore Hamilton (6); Daphne Hamilton... View Obituary & Service Information

The family of Cheng-Mong Lin created this Life Tributes page to make it easy to share your memories.