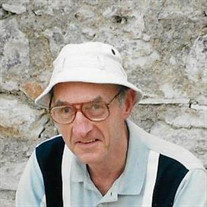 Charles John “Chuck” Whaling was born on February 24, 1928 in Daytona Beach, FL and died on July 8, 2017 at SECU Hospice House in Smithfield, NC. He was predeceased by his mother, Mary Edna Geldart Whaling, father, William John Whaling, and sister, Lois Estelle Whaling Schaus. He is survived by his loving wife of 62 years, Elizabeth Coble “Liz” Whaling, son Jonathan Charles “Jon” Whaling, and granddaughters, Melissa Lee Whaling and Laura Kathryn Whaling. Chuck moved with his family to their native Stratford, Ontario at a young age, before gradually making his way back south during his lifetime. He was a graduate of Stratford Central Secondary School and completed postsecondary work in Mechanical Drafting through the International Correspondence School and Commercial Art and Illustration with the Famous Artists School. Chuck had a long successful career as a furniture design engineer for a number of prominent companies, including Stromberg Carlson, Philco Ford, Jens Risom Design, and Ethan Allen, Inc. His teams developed some of the earliest designs for color television cabinets and stereo entertainment consoles. Chuck was a true craftsman, designing and building furniture, cabinets, closets, and other home furnishings. He was also an avid reader, history buff, and classical music lover. He enjoyed mysteries, from Agatha Christie to Sherlock Holmes and The Avengers to The X-Files. Chuck and Liz met and married in Rochester, NY in 1955 after a whirlwind romance. They also lived in Maple Glen, PA and Ellicottville, NY, before settling in Ridgefield, CT for many years. After his retirement from Ethan Allen in 1993, he and Liz moved to Fearrington Village, NC to be closer to their son and his family. Retirement created a new life that included worldwide travel, community service, and time for granddaughters, old hobbies and new friendships. Chuck helped build over a dozen Habitat for Humanity houses in Pittsboro, using his meticulous design and woodworking skills. He and Liz were active members of Duke University Chapel, served meals at the Durham Rescue Mission, and volunteered at the Chatham Habitat for Humanity Restore in Pittsboro. In his ample free time, he built dozens of scale models from kits and radio control airplanes from scratch, in the process spending countless enjoyable hours in his workshop. He was a member of the Flying Tigers of Jordan Lake RC club, however he rarely flew his planes, afraid of the damage they might encounter from a crash landing! As a father, Chuck was consistently devoted to his son’s activities and a driving force behind several of his early life goals. He was an adult leader in Jon’s Boy Scout troop at St. Stephen’s church in Ridgefield, CT. He devoted much time to traditional father-son activities of auto repairs, home repairs, yardwork, and the fine art of puttering. Most importantly, he instilled in his son values of responsibility to family and friends, being true to your word, and never taking life too seriously. His last years brought out the best in Chuck’s personality. He was persistently positive and never met a stranger. His quick wit, which could completely disarm you, continued through his final days with nurses and caregivers in the hospital and hospice. His humor and sweet nature will live on the hearts of family, friends, and caregivers. A memorial service will be held at Duke Chapel on the Duke University campus on August 14, 2017 at 2:00 PM. In lieu of flowers, donations may be made in Chuck’s memory to Chatham Habitat for Humanity, Alzheimer’s Association, or The Friends of the Duke Chapel Fund.

The family of Charles John Whaling created this Life Tributes page to make it easy to share your memories.

Send flowers to the Whaling family.