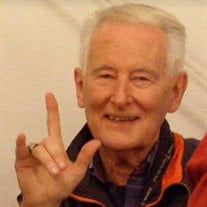 Charles Eugene Hobby, 81, died on Wednesday, July 17, 2019 at Wake Medical Center, Cary. Mr. Hobby was born in Harnett County, North Carolina on October 17, 1937 to Robert Eugene Hobby and Maude Genera Dixon Hobby. Known to many friends as “Gene” and as “Pops” to family, was a loving son, brother, father, grandfather, uncle, and friend. He joined the United States Marine Corps (USMC) in June of 1958 and was stationed at Parris Island, SC, Camp Lejeune, NC, in Hawaii, and served in Vietnam for 87 days. He was honorably discharged from the USMC in 1961 and began racing Grand National Cup stock cars, NASCAR and NASCAR Grand National races, LMS and Dash cars between 1964-1986 as Gene Hobby. Over the last five decades, Gene was actively engaged in the racing community as a driver, historian, philanthropist, and president of the Historic Speedway Group. Charles is survived by his daughters, Gina Ennis (Jerry) of Apex and Christy Hobby of Clayton, grandchildren, Kevin Wilson of Phoenix, AZ, Jessica Hobby of Raleigh, Cheyenne Helminiak of Raleigh, and sisters, Marion Smith (George) of Apex, Patricia Bryant (Bob) of Clayton, Jane Ragan (Joe) of Apex, and Deborah Parker of Willow Springs. He is preceded in death by his sister, Betty Jean Humphries. A graveside service with Military Honors will be held at 11:00 am Saturday, July 20, 2019 at Wake Memorial Park, 7002 Green Hope School Rd, Cary, NC 27519. Please note there are no restroom facilities at the cemetery and the service will be standing room only. Attire: Please feel free to wear casual racing/Marine attire in his honor In lieu of flowers, Charles has requested donations to the non-profit organization, Stocks for Tots. Online donations accessible at: (https://www.facebook.com/donate/355196898454273/)

The family of Charles Eugene Hobby created this Life Tributes page to make it easy to share your memories.

Send flowers to the Hobby family.