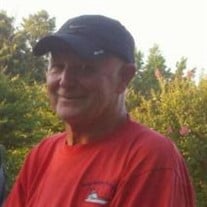 Charles “Edward” Hicks, 70, of Garner, North Carolina, succumbed to dementia surrounded by close family on Tuesday, January 29, 2019. Ed was born on July 12, 1948 in Garner, North Carolina to Mary Parrish Hicks and Thomas Hicks. Ed served his country in the U S Army during the Vietnam War, receiving The Purple Heart. He owned Auto Marine Service of 45 years and was passionate about his line of work but was forced to give up the career he loved due to his health. Ed enjoyed spending time with his family and friends. He also loved to go walking, hunting and fishing whenever he had time. Ed is survived by his wife, Kathy McLamb; son, Derek McLamb; daughter, Stephanie Hicks and fiancée, Ben Johnston; brothers, Rick Hicks and wife, Donna, and their children Scott and Sara; Randy Hicks and wife, Janet and their daughter, Dondee Brown and her husband, Kenny; and many loving extended family members. He was preceded in death by his parents, Mary Parrish Hicks and Thomas Hicks, and his second daughter, Erica Hicks. Ed was a loving father, husband, and a friend to everyone. A special thank you to the people at Heartland Hospice and Cary Health and Rehabilitation Center for their loving care and support during his final days. A celebration of life service will be held in the spring. In lieu of flowers, memorial contributions may be made to Heartland Hospice Memorial Foundation, or to Dementia Research.

The family of Charles Edward Hicks created this Life Tributes page to make it easy to share your memories.

Send flowers to the Hicks family.