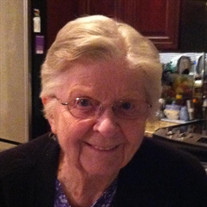 Catherine “Kitty” Steeves Hollowell, 92, passed away peacefully in her sleep at home on Aug. 25, 2021. Catherine was born in Massachusetts to Leslie and Winifred Steeves. Both of her parents were originally from Canada – her father from New Brunswick and her mother from Prince Edward Island. Catherine was proud of her Canadian and Scottish heritage and enjoyed many summers in her youth vacationing in the Maritime provinces with her younger brother and her Canadian cousins. She wasn’t thrilled, however, when they gave her warm buttermilk to drink and dried seaweed as a snack. After completing her training as a registered nurse, Catherine began working at Peter Bent Brigham Hospital in Boston. It was there that she met her husband of almost 70 years, Dr. Victor Boyce Hollowell. Victor was immediately smitten with the smart, attractive redhead with the sparkling blue eyes. After marrying, Catherine and Vic returned to his home state of North Carolina and settled in Charlotte. While Victor set up and grew his surgical practice, Catherine maintained the household, which grew to include four active children. In addition to raising the children, Catherine was an active volunteer at the many churches they attended over time including the Little Church on the Lane (Moravian) in Charlotte, Shiloh Baptist Church, and Bonds Grove Methodist Church (now Weddington United Methodist). She also volunteered with the Dyslexia Foundation, pet vaccination clinics in Union County, and various libraries including the library at Woodland Terrace in Cary. Catherine loved the outdoors and spent many years camping around the Carolinas with Victor and the children in their Airstream trailer. Eventually, she and Victor decided to purchase some property in the mountains for vacation use. Somehow Victor was able to convince Catherine to go along with his ambitious plan to purchase a large tract of land that had no road and no structures and to build a log home on it by themselves using a log home kit. Catherine was a willing and very active partner in this endeavor which took many years to complete. Catherine loved the mountain home and particularly enjoyed hiking on the property and on the Blue Ridge Parkway trails. It was there that Catherine participated in many a game night with the family where she established her dominance at Trivial Pursuit. Catherine also spent many enjoyable hours as a barn mom and was always willing to help the riders and horses. Upon Victor’s retirement, Catherine and Victor moved to the community of Shiloh in Camden County. They lived in a tranquil setting on the Pasquotank River where Catherine spent much time admiring the waterfowl and hosting family reunions. Catherine and Victor later moved to Weddington where they lived for several years and finally to a senior community in Cary. All along the way they made wonderful friends who enriched their lives. Catherine was a loving and devoted wife and mother, a lover of nature and animals, an avid reader and bird watcher, and a wonderful cook. Throughout adulthood, Catherine almost always had a dog as a constant faithful companion, and often a cat or two as well. She loved them all dearly. Her cooking and recipes remain legendary within the family including her chili beef dip, chicken and dumplings, pimento cheese, pound cake, fig jam, and sweet pickles. Catherine was the glue that held the family together and will be greatly missed. Surviving Catherine are her husband Victor; daughters Victoria Hollowell (Wallace, deceased), Leslie Davis, and Abigail Deibert (Jeff); grandson Matt (Sarah); and great granddaughter Claire. Her beloved son Victor “Bud” Hollowell, Jr. and brother Charlie Steeves predeceased her. A memorial service at Woodland Terrace will be held at a later date. Donations in her memory may be made to any nature or animal rescue organization of your choice.

Catherine &#8220;Kitty&#8221; Steeves Hollowell, 92, passed away peacefully in her sleep at home on Aug. 25, 2021. Catherine was born in Massachusetts to Leslie and Winifred Steeves. Both of her parents were originally from Canada &#8211;... View Obituary & Service Information

The family of Catherine "Kitty" Steeves Hollowell created this Life Tributes page to make it easy to share your memories.

Send flowers to the Hollowell family.