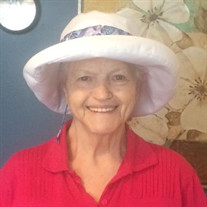 Carolyn Marie Bell Blackburn passed from complications related to cancer on Saturday, November 20 at her home surrounded by her close family and beloved dog Zippa. Mrs. Blackburn was born in Louisburg, NC on April 06, 1940, to William Cleathen Bell and Nellie Pearce Bell. Mrs. Blackburn moved to Durham in 1960 and began work at Golden Belt Manufacturing near downtown. It was here that she met her lifelong friend Linda Markham. It is also during this time that she met and married her former husband, the late Harold Dean Blackburn, Sr, originally from Ashe County, NC. Mrs. Blackburn later began working at Edward Weck & Company in the RTP, which was later bought by Teleflex, from which she retired in 2000. Mrs. Blackburn also worked for several years post retirement at Target in Briar Creek, where she enjoyed both her co-workers and customers. She was a long time member of West Durham Pentecostal Holiness Church. She is survived by her daughter Angela Marie Blackburn, son Dean Blackburn, grandkids Brook George, Christy Corvin and Joey Corvin, and four great grandchildren. Mrs. Blackburn is also survived by brother Carson Bell, and sisters Rebecca Watson and Bonnie Cash, and many loving nieces, nephews, and wonderful In-laws. She is preceded in death by her parents, her former husband, Harold Blackburn, Sr, a brother E.C Bell, and sisters Dorothy Burnette and Bobby Jean Hill. A memorial service is planned for Saturday, December 18, at noon at Living Springs Church of God, 708 Winston St, Franklinton, NC 27525, followed by a fellowship lunch. The family will receive guests from 11am-11:45am at the church prior to the service. Attendees are encouraged to wear purple if able, Mrs. Blackburn’s favorite color. Mrs. Blackburn has asked that no flowers be sent but encourages loved ones to donate to a charity of their choice in her name if so inclined. Arrangements are being handled by Wake Funeral Home, www.wakefuneral.com.

The family of Carolyn Bell Blackburn created this Life Tributes page to make it easy to share your memories.