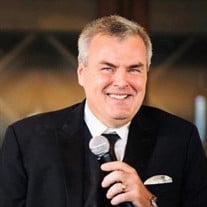 Brendan "Ben" Gilmartin passed peacefully into eternal life on Wednesday, October 21, 2020 in the presence of his loving wife and children after bravely fighting cancer for several months. Brendan was an avid golfer, but his first love was always his family. Brendan, or "Ben" as he was known to friends and colleagues, was an executive with IBM before retiring after 35 years and was employed by Oracle at the time of his death. He was as successful in his personal life as he was in his professional life and was someone friends and family could always count on for advice, to lend a hand, or to put a smile on their face. Brendan is survived by his devoted wife, Gloria, of 39 years, three children who were his pride and joy - Shannon (Whitt) Morehead, Kerianne Gilmartin and Brendan Michael Gilmartin. He leaves 5 grandchildren to whom he was lovingly known as "Ogie" - Rylan, Shawn Caroline, Savannah, Whitten, and Christian Thomas. He is also survived by his mother, Anna Gilmartin, five brothers - Kevin (Judi) Gilmartin, Tim (Beth) Gilmartin, Gerry (Linda) Gilmartin, Tom (Marge) Gilmartin and Brian Gilmartin. He also leaves several nieces and nephews whom he loved dearly as well as his in-laws who cherished his good nature and gentle ways. He was predeceased by his hero, his dad Gerald V. Gilmartin, his beautiful niece, Kelly Anne Gilmartin, and three precious grandchildren Andrew, Kellen, and Audra Morehead. A funeral Mass is scheduled for Friday, November 6, 2020 at St. Mary Magdalene Catholic Church in Apex, North Carolina at 11:00 a.m. with reflections beginning at 10:40 a.m.

Brendan "Ben" Gilmartin passed peacefully into eternal life on Wednesday, October 21, 2020 in the presence of his loving wife and children after bravely fighting cancer for several months. Brendan was an avid golfer, but his first love was... View Obituary & Service Information

The family of Brendan Thomas "Ben" Gilmartin created this Life Tributes page to make it easy to share your memories.

Send flowers to the Gilmartin family.