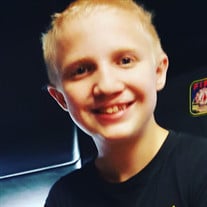 Brandon Michael Strickland, age 11 and a half years old, was called home to Jesus after a long, hard fought battle with Congenital Heart Defects on Tuesday, October 24th, 2017 at 3:43a.m. at Levine Children’s Hospital in Charlotte, NC. Brandon lived with his mom, dad, sister and brother in Ebony, VA. ` Brandon was an amazing young man. His smile lit up an entire room. He gave hugs freely to anyone who he felt needed one. He touched the hearts of people who only knew him through pictures and those that have known him his entire life. Brandon participated in several shows on the Narroway stage in Fort Mill, SC, alongside his sister and brother. He began his education at Rama Road Elementary in Charlotte, NC. Later, we began to homeschool him, and he enjoyed being at home and having more time for his favorite activity, playing video games. His favorite games were Minecraft and Pokemon. When he was 5, we all became involved with Camp LUCK (Lucky Unlimited Cardiac Kids), a medically supervised camp for heart kids. He absolutely enjoyed heading to camp every year. He made many friends and left a huge impression on every single camper there. Brandon is survived by his sister Jordyn Michelle Strickland, age 17, and his brother Travis Wade Strickland, age 7. They may have had their differences as all siblings do, but they loved and cared for each other. Brandon and Travis loved to play video games and sword fights every day. They loved joking about everything (especially about farts and other weird bodily functions). Brandon adored his big sister and she adored him. They would annoy each other constantly but I knew, deep down, that they loved each other very much. Brandon is also survived by his loving parents, Roy Calvin Strickland (RC), age 40 and Kimberly Ann (Martin) Strickland, age 39. He is also survived by his grandparents, Roy And Fannie Strickland of Oxford, NC and Donald and Kathleen Martin of Cary, NC. He is also survived by many aunts and uncles and cousins as well as his loving dog, Blue Moon.

The family of Brandon Michael Strickland created this Life Tributes page to make it easy to share your memories.

Brandon Michael Strickland, age 11 and a half years old, was...

Send flowers to the Strickland family.