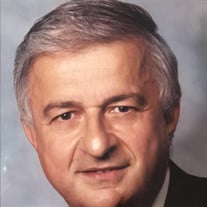 Anthony Thomas Liotti died suddenly on Sunday, February 25, at age 79. He is predeceased by his parents, Paul and Rose Liotti, sisters Pauline Klosterman and Elizabeth Wakefield, and grandson Joshua Liotti. He is survived by his devoted, loving wife of 56 years Ann (Fischer) Liotti; his son Paul, his wife Kristin (Baumgarten) and their two sons Dominic and Owen of Rochester, NY; his son John, his wife Michele (Furner) and their two daughters Abigail and Janel of Harrisburg; his daughter Ann, her husband Steven Prior and their two daughters Emma and Ayla of Hornell, NY; and a host of loving in-laws, nieces, nephews and a long-time friends. A compassionate man, Tony was loved by more than can be counted and could barely contain his pride when it came to his family and his beloved Notre Dame Fightin’ Irish. A veteran of the United States Navy, he touched a multitude of lives through his professional career, which spanned decades at Eastman Kodak, as an adjunct professor at Rochester (NY) Institute of Technology and SUNY Brockport (NY), and later in life as a black jack dealer with casino event companies. Tony had a passion for life and there wasn’t a conversation he’d shy away from. It only took a matter of minutes before perfect strangers became lifelong friends. He reveled in his grandchildren’s achievements, whether it was in the classroom, on the field, on the court or on the stage; traveling hundreds of miles just for a chance to see them perform. Somewhere right now he’s having a cigar, strategizing with Knute Rockne. Our white-haired patriarch will be missed. Visitation will be held at 10 am Thursday, March 1, 2018, at St. Andrew Church, 3008 Old Raleigh Rd, Apex, NC. A Mass of Christian Burial will follow at 11 am and we will celebrate Tony’s life with a reception after the services in the St. Andrew church hall. Arrangements will be provided by Wake Funeral and Cremation. In lieu of flowers, memorials may be sent to the Durham VA Medical Center, 508 Fulton St., Durham, NC, 27705. Attention Voluntary Service (135) and reference the intent in the memo field.

Anthony Thomas Liotti died suddenly on Sunday, February 25, at age 79. He is predeceased by his parents, Paul and Rose Liotti, sisters Pauline Klosterman and Elizabeth Wakefield, and grandson Joshua Liotti. He is survived by his devoted, loving... View Obituary & Service Information

The family of Anthony Thomas Liotti created this Life Tributes page to make it easy to share your memories.

Send flowers to the Liotti family.