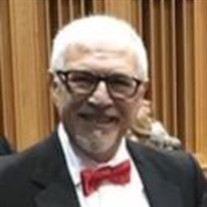 On October 17, 2021, Anthony R. DiNapoli left his earthly home and was welcomed into his Heavenly mansion by our Father Jesus Christ. He was surrounded by his family as he peacefully took his final breath. Tony, as he was known by friends and family, was born May 5, 1948 in Passaic, NJ. He is the son of Raphael and Rosaria (Sadie) DiNapoli. Tony was a life-long educator. He began his career in 1970 at Madison-Mayodan High and Middle School in Madison, NC as the band director. He was also band director at Richmond County High School in Rockingham County, NC. Music was one of his greatest passions. As his music education career excelled, he also participated in high school band competitions across the state of North Carolina as an adjudicator. To culminate his career, Tony earned his Masters Degree in School Administration and became a school administrator. Tony served as a School Administrator in Cumberland and Wake Counties. After retirement, his musical passions led to performance as he became a member of the Bayonne Bridgemen Drum and Bugle Senior Corps in Bayonne, New Jersey. He traveled to march in the corps for 5 years. He was also a member of the Raleigh Concert Band for several years. Tony’s dearest passion, however, was his family. He and his loving wife, Catherine (Kitty), were married for 51 years. They were loyal members of St. Andrew the Apostle Catholic Church. Together they had 2 children and the absolute love of his life, 5 grandchildren. Tony was a loving and dedicated husband, a providing father and mentor, and the best Grandpa any kid could ask for. He supported every event, every game, every accomplishment of his children and grandchildren and beamed with pride every time. The joy of his life was his family. Tony is survived by his wife, Catherine (Kitty) DiNapoli of Holly Springs, NC; his children Monica (Luther) Maday of Woodstock, GA and Vincent (Ciara) DiNapoli of Winterville, NC; his grandchildren, Madelynn, Christian, Laila, Sean, and Maia; his sister Francis Van Strien (Martin) of Treasure Island, FL and a special cousin, Camille Cimino of Pt. Pleasant, NJ; his mother-in-law, Ina Carroll Propst, brother-in-law, Craig Cansler, and his sister-in-law, Beverly (Micheal) all of Hickory, NC; and a host of cousins, nieces and nephews. He will be forever loved and remembered by all of his family. In our Father’s house, there are many mansions. We find great comfort in knowing Tony walked into his Heavenly mansion with Jesus by his side, playing music with the angels. Rest easy, Dad. You are so loved. “I have fought a good fight, I have finished my course, I have kept the faith: Henceforth there is laid up for me a crown of righteousness, which the Lord, the righteous judge, shall give me at that day: and not to me only, but unto all them also that love his appearing.”-- 2nd Timothy 4:7-8

On October 17, 2021, Anthony R. DiNapoli left his earthly home and was welcomed into his Heavenly mansion by our Father Jesus Christ. He was surrounded by his family as he peacefully took his final breath. Tony, as he was known by friends... View Obituary & Service Information

The family of Anthony R. DiNapoli created this Life Tributes page to make it easy to share your memories.

Send flowers to the DiNapoli family.