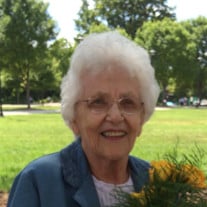 Anne Louise Davis Savio, 93, of Cary, passed away peacefully at Glenaire Continuing Care Retirement Community on September 11, 2020 surrounded by her loving family. Anne was born in Greenwich, CT on August 9, 1927, daughter of Raymond Edgar and Marie Curtis Davis. In addition to her parents, she was predeceased by her husband, David Edward Savio, her sister, Josephine Davis Schnautz, and her aunt, Florence Abbott Curtis. She is survived by her daughters and their spouses, Nancy (Richard) Marcello, Linda (Fernando) Gaviria, and Jane Savio (Kevin Sutton), as well as seven grandchildren (Amy Myers, Daniel [Amber] Marcello, Natalie Gaviria, Cristina Gaviria, Ryan Hosfelt, Emily Hosfelt, Bailey Hosfelt), two great-granddaughters (Shila Myers, Renata Marcello), two nieces and one nephew. Anne grew up in Port Chester, NY and raised her family in Rye, NY before moving to Ridgefield, CT. She worked as a secretary for many different organizations including the American Can Company, the Rye Board of Education, the United Methodist Center, and Jesse Lee Methodist Church. She relocated to Cary in 2003 and was a faithful member of St. Paul’s Episcopal Church. A dedicated daughter, sister, wife, mother, grandmother, great-grandmother, and aunt, Anne will be greatly missed by her beloved family and friends. A service will be held at St. Paul’s Episcopal Church Memorial Garden on Saturday, September 19 at 11:00 AM. In lieu of flowers, donations can be made to a charity of one’s choice in her memory.

The family of Anne Louise Davis Savio created this Life Tributes page to make it easy to share your memories.

Send flowers to the Savio family.