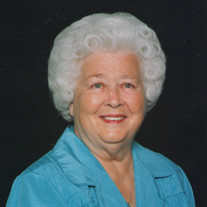 Mrs. Anna Hortense Bridgers Raynor died on March 5, 2016. Mrs. Raynor was born to Alvin Orris Bridgers and Beulah Lawrence Bridgers on November 29, 1929. She spent her childhood in Wendell, NC, and graduated from Wendell High School. She then attended Mars Hill College where she earned her Associate’s degree. It was on a blind date on June 22, 1948 that she met her future husband, Dr. Leighton Alfred Raynor, Jr. They were married that same year, on December 22, 1948. Dr. Raynor, an optometrist, practiced in Apex, NC, and in the early years of the practice Hortense helped him in the office, establishing a practice that would last 59 years. She also worked as a photographer and Apex correspondent for the Raleigh Times and the News and Observer, developing the photos herself, in her own darkroom, and documenting life in Apex for nearly three decades. Hortense joined Apex United Methodist Church in 1949, and faithfully attended Sunday School and worship, was a member of the United Methodist Women, and held various offices in the church. She also belonged to various social and civic organizations in Apex, and especially enjoyed the “Red Hat Club” and assisting L. A. in his work with the Lions Club. One of her greatest joys was following the University of North Carolina Tar Heels football and basketball teams. She was a season-ticket holder for 47 years, and traveled nationwide supporting the Tar Heels. She showed her loyalty by dressing in elaborate UNC regalia and was featured during televised games and in newspapers on multiple occasions. Hortense is survived by three children: Dr. Leighton Alvin Raynor (Eileen) of Morganton, NC; David Shelton Raynor, of Raleigh, NC; and the Reverend Leigh Annette Raynor of Albany, GA. She is also survived by three grandchildren, whom she adored: William David Raynor of Los Angeles, CA; Grace Marie Raynor of Morganton, NC; and James Leighton “Jimbo” Raynor of Morganton, NC. In addition, she is survived by her brother, Shelton V. Bridgers (Rebecca) of Wendell, NC, and two nephews, Warren and Glenn Bridgers, both of Wendell, NC. Mrs. Raynor was preceded in death by her husband of 62 years, and by an older brother, David Lawrence Bridgers. A Service of Remembrance will be held at 11:00 A.M. on Saturday, March 12, at Apex United Methodist Church. Burial will be private. The family will greet friends at a reception following the Memorial service. In lieu of flowers, the family requests donations be made to Apex United Methodist Church.

The family of Anna Hortense Bridgers Raynor created this Life Tributes page to make it easy to share your memories.

Send flowers to the Raynor family.