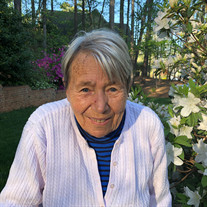 Ann Marie Weigeshoff, beloved mother and Bestemor passed away on Friday, April 27, 2018 at her daughter’s home after a long auto immune illness. She was born in 1939 to the late Hilma and Manfred Swenson. Ann Marie graduated from Tenafly High School and Upsala College. She began work with Louis Harris and Associates in New York City. After marrying the late Robert Weigeshoff, they lived a wonderful few years in San Juan, Puerto Rico. Later they returned to NJ to start a family and eventually moved to Highland Lakes, NJ where she had also spent summers as a child. She was active in the Highland Lakes Country Club and Community Association and Holy Counselor Lutheran Church for many years. She loved living at “the lake” and enjoyed all it had to offer. Many days were spent drinking tea and chatting with her friends. Ann Marie traveled the world beginning as a teenager when she spent the summer in Cuba. Following college, she sailed to Europe to travel. She had a long and successful career at IMS Health where she worked for over 25 years. In retirement she continued her travels with trips to Egypt, China, Peru, Thailand, England and Alaska. She settled part time in Southport, NC where she became an active member of Saint Peter Lutheran Church and loved singing in their choir. Ann Marie lived a full life which was made richer by many, many lifelong friendships. She felt lucky to have had many close friends for so long and said this often. Ann Marie is survived by her daughters Heidi Crowe (John) of Holly Springs, NC and Gretchen Bischoff (Peter) of Castleton, VT, her two loved grandchildren, Gretchen Crowe and Gunnar Bischoff, and her brother Paul Swenson of Southport, NC. She also leaves behind amazing brother and sister in laws and nieces and nephews. She was preceded in death by her dear sister Carleen Sowers. A service will be held on June 9th, 1:00pm, at Saint Peter Evangelical Lutheran Church, 4843 Southport-Supply Road, Southport, NC. The family will receive friends following the service. Memorial Contributions can be made to Lutherock Camp and Conference Center, 84 Camp Luther Road, Newland, NC 28657

Ann Marie Weigeshoff, beloved mother and Bestemor passed away on Friday, April 27, 2018 at her daughter&#8217;s home after a long auto immune illness. She was born in 1939 to the late Hilma and Manfred Swenson. Ann Marie graduated from Tenafly... View Obituary & Service Information

The family of Ann Marie Weigeshoff created this Life Tributes page to make it easy to share your memories.

Send flowers to the Weigeshoff family.