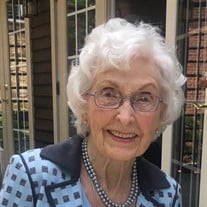 Agnes Lucille “Lu” Mazzu died peacefully in her sleep on July 14, 2021 in Raleigh NC; with the love and prayers of her family guiding her on her final journey. She was 95 years old and left this world (to join her husband Santino in heaven) with the same dignity and grace, that she lived her entire life. Agnes Lucille was born in a rural farmhouse (without electricity, running water or indoor plumbing) on September 23, 1925, in the small town of Ackley, Iowa. She was the sixth of nine children born and raised by Frank and Abbie Hayes, descendants of immigrants escaping the Irish Potato Famine in the mid-1800s. Along with her 8 other siblings she experienced a childhood challenged by the Great Depression - resulting in the loss of the family home and business - but rich with the values of a strong and resilient family, the chores and hard work on the farm; and the enjoyment of the simple things in life: meals together with family; card and board games; playing the piano; singing in the church choir; gathering at home around the radio, and exploring the beauty of the outdoors and the bounty of food produced by the earth. As a young woman she dreamed of a college education, career, marriage, and children. Doing well in her studies at New Hartford High School she attended one year at the College of St. Teresa in Winona, MN helped financially by her brother Claude’s Navy salary and a summer’s work picking, cleaning, and selling cucumbers to a local pickle brining factory. A lack of funds and her commitment to the war effort led her from a small Iowa town of 1500 to the largest metropolis in America, New York City. There she trained for and was hired as an airline radio operator providing the critical communications interface, between pilots and air traffic controllers. It was in New York that she met her future husband Santino (Sandy) Mazzu a Northwest Airline (NWA) flight mechanic at the time. They were married in May 1949, welcoming their first child Linda, born the following year; then in 1954 moved to Minnesota for a new NWA post at the Minneapolis-St. Paul International Airport. By this time Sandy was beginning his new career as an airline pilot, while Lu transitioned to her new role as mother and matriarch of the Mazzu family, which over time grew in number of children to five. While family life revolved around her husband and children (and her huge extended family in Iowa and Minnesota) Lu balanced the family checkbook and juggled the children’s school, sports, transportation, and medical schedules. She also found time to serve as president of the Airline Pilot’s Wives Club; was quite active in the Catholic church ‘altar guild’; and participated in skiing, bowling, and golf sports. As the children got older, Lu and Sandy enjoyed vacations across the US in their RV and made frequent trips to their lake home on Sylvan Lake in northern Minnesota. But a weekly tradition that Lu especially enjoyed, was preparing and gathering the family around, her Sunday family dinners of Italian pasta and savory dishes. Shaped by her life’s humble beginnings and the optimism of post-war America, Lu developed her own sense of purpose and style – in her manner, poise, dress, world travels and home décor. Yet she never put on airs, was totally unpretentious and was always a positive role model for her family and many friends. However, her lasting family legacy will be the individual love and nurturing attention she showered on each of her offspring, which was a blessing from God that formed a strong and permanent bond with all her children. Lu is survived by her brother Larry and sister Audrey; children: Linda, Jackie, Kevin, Brian, and Tony; grandchildren: Lance, Justin, John, Lauren, Tristan, Caden, Mackenzie, Coco, and Sophia; and greatgrandchildren: London, Langston; Eliana and Adalyn. Having lived thru the great depression and WWII, Lu embodied all the core values of the ‘greatest generation’: love of family, country, and God; applying self-reliance and hard work as the path to success; never complaining; helping those less fortunate; and above all, an unwavering commitment to family. A memorial mass will be held 10:00 am Friday, July 30, 2021 at St. Andrew The Apostle Catholic Church. The funeral mass will be lived streamed at https://www.youtube.com/watch?v=mZimlVFrFgM

Agnes Lucille &#8220;Lu&#8221; Mazzu died peacefully in her sleep on July 14, 2021 in Raleigh NC; with the love and prayers of her family guiding her on her final journey. She was 95 years old and left this world (to join her husband Santino... View Obituary & Service Information

The Funeral Mass will be live streamed at https://www.youtube.com/watch?v=mZimlVFrFgM

Send flowers to the Mazzu family.