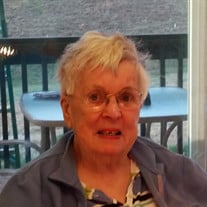 Mrs. Agnes Irene Flaherty Biette, age 87, passed away Saturday evening, January 18, 2020, in Cary, North Carolina, supported and surrounded by her family. She was born April 3, 1932, in South Portland, Maine to Martin J. and Catherine Connolly Flaherty. She always loved Maine, especially the rocks and the beaches. She attended Holy Cross Catholic Grade School and South Portland High School. As a student, she’d participate in shows and plays with her friends; singing and dancing in the shows as well as the choir. She was a devout Catholic throughout her entire life and always enjoyed singing in church. Agnes, or “Aggie” as she was more often called, met the love of her life, Russell Biette in 1955. Their first date was to the Winter Carnival Banquet and Ball in Portland, Maine on Friday, February 18th. They were introduced by her brother, Johnny, and after having coffee she said, “Well the coffee went down, so let’s see about this dance.” Russell was gone for a whole year when he was in the service, but they stayed in touch through letters. He wrote Aggie every day that he was stationed in New Jersey, Oklahoma and Texas. When Russell was stationed at Fort Dix, he bought a Better Homes and Gardens catalog. Aggie bought the same catalog in Maine. They both picked out a house and – as luck would have it – they chose the exact same model. They built it together in Pennellville, Maine. Russell proposed in October 1955 at a drive-in movie theater and they were married on September 22, 1956. She worked at General Motors Acceptance Corporation as a collections correspondent for seven years in Portland and had four girls working under her. After becoming a mother she would continue to help Russ in the office for many years. She was constantly proofreading, a habit that would continue for decades. The family moved to Murraysville, PA in 1965 where they lived for over 30 years, raising their daughter and two sons. There she was an active bowler, enjoyed working at the local library, volunteered for Meals on Wheels for over 30 years, and enjoyed socializing with her neighbors while playing bridge. She enjoyed square dancing with Russ, and said her only problem was finding a new and different dress to wear every week. She enjoyed talking to her sisters and loved the marigolds and tulips that she had planted. She was very proud of her tomatoes. She was a dedicated mother and grandmother and she could always be counted on to share an extra piece of candy or whoopie pie. She loved her grandkids and especially loved beating them at the board game Trouble or Chinese Checkers. She loved reading magazines and watching her “stories”. Her grandkids remember the fun they had with her, even simply throwing things down the laundry shoot. She and Russ were partners throughout life and were always happy just being together, whether traveling across the country or simply being home. They were dedicated to each other, caring for each other, and no matter the year or season in life could often be seen sitting next to each other on the couch, just holding hands. They embodied what it means to love someone every single day. She is survived by her husband, Russell A. Biette of Holly Springs, North Carolina, brother, John Flaherty of Portland, ME, daughter, Donna (Jim) Elmore of Lincoln University, PA, two sons, Steve (Cathy) Biette of Carmel, IN, and Doug (Beth) Biette of Cary, NC, ten grandchildren, Michael (Candice) Biette of West Orange, NJ, Diana (Jerrod) Nolting of Carmel, IN, Kelly Biette of Boston, MA, Jennifer (George) Kowalski of Philadelphia, PA, Katy (Jeremy Keller) Biette of Brighton, CO, Matthew (Karen) Elmore of East Brunswick, NJ​, ​Leo (Sydney Smith) Biette of Cincinnati, OH, Sean Biette of Bloomington, MN, Brian Elmore of Chicago, IL​, ​and Sarah Biette of Carmel, IN, and three great-grandchildren, Isla Elmore (18 months), Harold Biette (16 months), and Celia Nolting (3 months). She is preceded in death by her parents, Martin J. and Catherine Connolly Flaherty, and her sisters, Ann Leonard, Beatrice McLaughlin, and Mary Bell. Funeral arrangements for the spring in South Portland, Maine are to be determined. In lieu of flowers, the family requests donations made to St. Jude Children’s Hospital or St. Bernadette Catholic Church of Fuquay-Varina, North Carolina.

The family of Agnes Irene Biette created this Life Tributes page to make it easy to share your memories.

Send flowers to the Biette family.