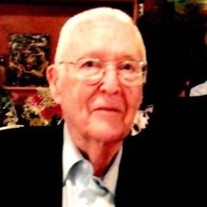 Adam Cartwright (Carty) Hart, 96, died January 25, 2018 after a long life well lived. Carty was born September 21, 1921 in York, SC to George Henry Hart and Mary Cartwright Hart. He was preceded in death by his wife of 65 years Margaret Johnson Hart; his two daughters Virginia Lee Hart and Katherine Hart Reddel; and his daughter-in-law Donna Rowe Hart. After graduating from York High School at 14 he went on to receive a BS in Chemistry and Mathematics from Hobart College, and a Masters in Physics from Hofstra University. He joined the US Army after graduation and served in two wars. In World War II he was a company commander with the 442nd Combat Infantry Regiment in Italy; and in the Korean War he was an anti-aircraft battery commander. He retired as a Colonel after serving in the Army for 33 years. Using his knowledge of guided missiles, he worked as a lead engineer for the Bendix Corporation under contract to NASA to develop avionics to help put American astronauts on the moon. After his work with the space program he became a licensed Professional Engineer; and as an Electronics Engineer he aided a number of corporations in dealing with the complexities and value of the new and burgeoning field of electronics and technology infrastructure. Although he had astronauts, Senators and NFL Hall of Famers as friends his true passions throughout his life were his wife and family. He is survived by his son Adam C. Hart, Jr and his wife Ann of Cary, NC; his son Kerry S. Hart, husband of Donna, of Atlanta, Georgia. Three grandsons, Chris Hart and his wife Amanda of Cameron, NC; Kerry S. Hart, Jr and his wife Cassie of Mason, Ohio; and Karl S. Hart and his wife Brittany of Kennesaw, Georgia. Seven great grandchildren, Annabelle Aguilar and her husband Darwin, Brantley Hart, Raynee Redington, Chris Hart, Jr, Chance Spohn, Brittany Hart and Adam Cartwright Hart III; and one great great grandchild Aiden Aguilar. He’s also survived by his wife’s sister, Barbara Keadle of Winder, Georgia. He was a member of the Masons, the V.F.W., the Retired Officers Association, and was a Chapter Commander of the South Carolina Chapter of the Military Order of the World Wars. He was a full Scholarship Donor to his beloved USC Gamecocks. He was also a long-time member of the St. Michael and All Angels Episcopal Church in Columbia, SC. A small graveside service will be held 2:00 pm Saturday, February 24, 2018 at Rose Hill Cemetery in York, SC; where he will join his wife, daughters, daughter-in-law, parents, his brother and sister-in-law, and dozens of ancestors dating back over a hundred and fifty years. Let the party begin! In lieu of flowers, the family asks you to send memorial contributions to: The Wounded Warrior Project: P.O. Box 758517, Topeka, Kansas 66675 or Shriners Hospital for Children: https://www.shrinershospitalsforchildren.org/shc/donate Online condolences may be made to www.wakefuneral.com/obituaries.

The family of Adam Cartwright Hart created this Life Tributes page to make it easy to share your memories.

Send flowers to the Hart family.